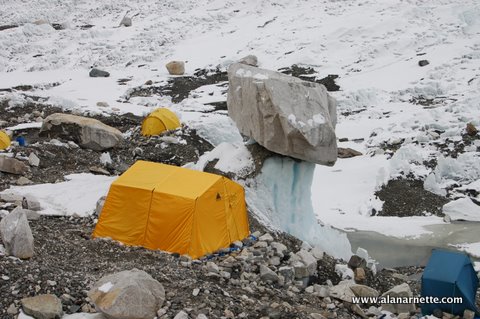 It has been a busy couple of days at Everest Base Camp where the teams have been arriving steadily since late last week. They spent the first few days making themselves at home, resting up, and taking acclimatization treks up near Kala Pattar, which is close to BC on the South Side of the mountain.

While the teams made themselves comfortable in what will be their home for the next six weeks, the Sherpas have been very busy. The Ice Doctors built the route through the Khumbu Icefall last week, and now they’ve fixed the lines all the way up to Camp 2. That clears the way for the climbers to begin making their first forays up the mountain, where they’ll establish their personal camps, stash gear, and even spend the night as they get use to the altitude. Only one thing stood in the way of that process getting under way, the all important Puja Ceremony.

The Puja is a Buddhist tradition in which the climbers and Sherpas are blessed by a monk, who is in effect asking the mountain to protect them while they climb, while also granting them permission to proceed up the sacred peaks. It is an important, if ceremonial, procedure that must be completed before anyone starts up the mountain. Yesterday, most of the teams in Base Camp on the South Side of Everest had their Puja ceremony, clearing the way for them to start going higher on the mountain.

Amongst those completing their Puja were the First Ascent team, led by Dave Hahn and the Himex squad. Dave has posted some photos from the ceremony, while the Himex news update has more information about the Puja itself. Dave, along with his clients Bill and Sara McGahan, will likely pass through the Icefall today and head up to Camp 1 for the night, while the Himex team, along with the IMG squad, will head over to Lobuche (6119 meter/20,075 ft) for an acclimatization and skills building climb.

Sherpas for the Peak Freaks team are carrying their loads up to Camp 1 and 2 today as well. Team leader Tim Rippel posted an update to their blog with information about their schedule, but also offering insights into the 3G cell service, which hasn’t been all that reliable thus far. Tim also talks about the yaks that are so important in the Himalaya this time of year, as they carry all the heavy loads at a time that they are at their weakest. After a long, harsh Himalayan winter, the yaks generally are quite thin and have little to eat, but they are vitally important to getting gear to the proper destinations. Those sturdy and strong critters are more valuable than gold in the mountains.

Finally, Alan Arnette has posted another well written and insightful blog entry that gives us all a great look at what life in Base Camp is all about. Alan is with the IMG team, and reports that there is a very relaxed feeling in BC this year. He notes that it is quiet there as well, with fewer people in camp, which should bode well for conditions later on. He does say that it has been colder than normal, and there are snowfalls nearly every day in the afternoon. Today, Alan is off to Labouche, so expect to hear how that climb went in his next entry.

It is a busy time in the Himalaya, but so far so good on Everest’s South Side at least.