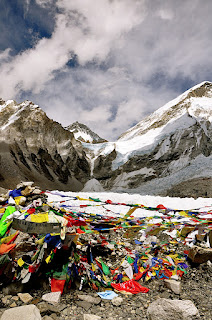 The Outside Blog has an interesting post up this morning regarding current conditions on Everest’s South Side, where the doctors in the Everest ER tent are on pace to see a record number of visitors this year. In a recent post to their blog, one of the docs says that they have seen 276 patients already this season, which they call “a blistering pace set to break all previous clinic visitation records.”

While that may sound like there is some terrible virus working its way through BC this year or that the climbers are taking bigger risks, the Everest Docs have a different theory. They believe that after spending several years in Base Camp, where they have more than earned a reputation for reliable and high quality care, that the teams are coming to rely on them more. Some of the teams may have even left their own doctors behind in favor of using the established docs who have been a part of the Everest ER squad for awhile now. Either way, the med tent is definitely busier, and the patients are receiving consistently better care than they have in the past.

In the same blog post, the docs say that they’ve had to treat several cases of HAPE/HACE, but all of the climbers who have had to be evacuated were feeling find when the rescue chopper came. They’ve also had reports back that after they’ve been taken from BC, the patients have recovered nicely as well.

They’ve also had to deal with their first case of frostbite, suffered by a Sherpa who took his glove off at Camp 1 where the winds were howling at 100 mph (160 km/h). That incident prompted them to post some great advice on how to avoid frostbite when caught on in the cold. That list looks like this:

-Stay well hydrated and well fed to enable your body to generate heat!

-Avoid alcohol, which can impair your sensation (and judgment!)

-Avoid smoking, which will constrict your blood flow

-Avoid tight fitted clothing (eg no wrinkles in the socks)

-If your clothing/socks/gloves get wet from snow/rain or perspiration, DRY them quickly – including boot insoles

-Wear mittens rather than gloves in extreme cold and a liner glove underneath if you need quick temporary access to fingers (e.g. photography)

-Never ignore numbness – as an old professor once told me – ‘if you feel your fingers and toes getting numb and you ignore it, that numbness might be the last thing you ever feel!’ Numbness is a sign that you may be getting into trouble. If it doesn’t resolve by increasing activity, you need to get somewhere to take off your gloves/boots and rewarm yourself.

-Avoid rubbing frostbitten areas – beating on them only increases the chance of injury and doesn’t help them rewarm faster.

-IF you or your buddy has frostbite, get somewhere warm, but only rewarm the injured area if there is no chance it will refreeze. The quickest way to rewarm is to submerge in warm water (~104F, or the warmth of a hot tub, test the water first with a thermometer or an uninjured body part – a frozen hand can’t determine if the water is too hot!)

–keep the area padded and protected against further heat loss.

-Get to a doctor as soon as possible if there is frozen tissue or if normal sensation doesn’t return after rewarming. New treatments, like some antiinflammatories and clot-busting drugs are TIME sensitive – and are only effective if given within 24 hours of thawing.

Great advice straight from the doctors that I thought was worth sharing considering that many of us visit areas that get cold enough to induce frostbite, something I wouldn’t want to wish on anyone. Keep these in mind the next time you’re heading to a Pole!