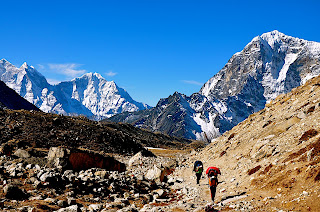 Over the past week and a half or so, we’ve been tracking the progress of climbers in the Himalaya, as they prepare to take on the big Himalayan peaks this spring. Before they can do that however, there are a number of milestones that must be reached, not the least of which is surviving the chaos that is Kathmandu. Once they leave the city behind however, the next step is getting to base camp, and now, as the week winds to a close, the first teams are arriving in Everest BC, where they’ll soon start the climb itself.

Dave Hahn posted an update to the First Ascent blog earlier today announcing that he, and his clients, Bill and Sara McGahan had arrived in EBC a few days ago, which means they made quite a rapid trek through the Khumbu. Bill and Sara are said to be feeling fine, but they’ve been taking it fairly easy so far. Tomorrow, the team will go through their Puja ceremony, which is a blessing from the local monks so that climbers are protected while climbing the mountain and granting them permission while traveling on sacred ground. After that, the climb can officially begin.

Dave also noted that the Khumbu Ice Doctors have once again completed a route through the Icefall, which is the most treacherous region on the South Side of Everest. Apparently the lines have been fixed all the way up to Camp 1, which clears the way for the first acclimatization climbs up the mountain. Dave, Bill, and Sara will likely be heading up this weekend with their first gear caches as well.

Other teams are beginning to get closer to BC as well. Alan Arnette’s group, which is led by the IMG, are scheduled to arrive on Sunday, and the Himex and Altitude Junkies should reach camp this weekend as well. David Tait may already be in camp, although he hasn’t posted an update confirming his arrival, and Edurne Pasaban is now on her way to the mountain as well. She hopes to climb Everest once again this year, but this time without the use of supplemental oxygen.

Next week should be a busy one. It seems most of the big teams will have arrived by this weekend, and the real climbing will begin. Judging from the photos that Dave Hahn posted, there is a lot of snow in the Khumbu this year. When I was there last spring, there was snow, but certainly nothing like that. It remains to be seen if there is a lot on the mountain as well, but the weather can change quickly and melt what is left rapidly as well.