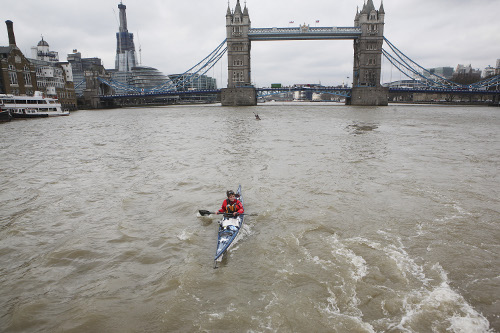 Back in December I posted a story about ocean rower Sarah Outen’s plans to circumnavigate the globe under her own power. Sarah, who had successfully rowed solo across the Indian Ocean in 2009, had made it known that she would be riding her bike and paddling her way around the planet, an ambitious endeavor to say the least. Last Friday, she kicked off that journey, setting out on what she calls her London2London via The World expedition.

Sarah started this latest adventure by paddling under the London Tower Bridge, which serves as both the starting and finish line. From there, she’s now traveling by kayak down the Thames River and then across the English Channel, where she’ll get out of the water and hop on her bike. Over the course of the rest of this year, she’ll be pedaling across Europe and Asia, where she’ll eventually reach the Pacific Ocean. When she does, she’ll get back into a boat and row her way across the Northern Pacific to Vancouver. That stage will be followed up with another leg on her bike, which will take her across the U.S. and Canada, eventually ending in New York City, where she’ll get in her boat one last time, and row across the Northern Atlantic. If all goes according to plan, she’ll be paddling back under the London Tower Bridge sometime in 2013.

It has been an eventful first couple of days for Sarah, mostly due to the media attention surrounding her launch. Examining her expedition tracker however, shows that she has completed the first paddling leg this morning, and has successfully crossed the Channel. She’ll now be climbing aboard her bike for the first really long and difficult stage of the trip. It’ll be several weeks before she’s out of Europe, and once she leaves those friendly confines behind, the real challenges will begin.

You can follow Sarah’s progress on her blog, and if you read her updates from the Indian Ocean a few years back, you no doubt recall how interesting her reports can be. I’m sure these updates will be no exception, and I look forward to keeping track of how many Mars bars she consumes along the way. They’re her favorite source of fuel on these calorie burning adventures that she keeps finding herself on.

I’ll posted updates as Sarah makes progress on what is sure to be a long, yet amazing journey.