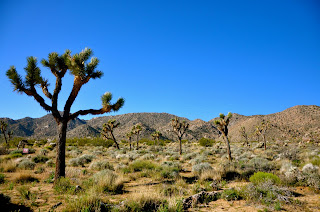 Last week I mentioned that it was the start of National Parks Week here in the U.S., which is an annual celebration of all the fantastic wilderness areas that have been set aside for public use by the government. Places like Yosemite and Yellowstone and dozens more. During this week, which runs until next Sunday, April 25th, all of the parks in the U.S. system have waived their entry fee, allowing visitors to explore them for free. Over the weekend, I was fortunate enough to be invited to Joshua Tree to attend a special event which not only kicked off National Parks Week, but also marked the beginning of Nature Valley’s 2011 Preserve The Parks campaign.

The event was actually held just outside Joshua Tree National Park on a parcel of land that epitomizes the area. It is dry and hot, like many deserts around the planet, but it is also amazingly beautiful and alive with plants and animal life. This particular piece of land, located near the town of Joshua Tree, is 950 acres of desert wilderness that also happens to be home to a protected species of desert tortoises. It was purchased by the Mojave Desert Land Trust in an effort to protect the ecosystem there. The Trust is now working with the government to try to get this land incorporated into the national park itself.

On Saturday, I joined a group of volunteers, Nature Valley representatives, and members of the National Parks Conservation Association to work on a restoration project in the region. Amongst the group was actor Josh Holloway of Lost fame, who is serving as the spokesperson for the Preserve the Parks campaign this year. Holloway is a dedicated proponent of the national parks and an avid outdoorsman. While elements of the event were photo-ops to for use in promoting the program, Josh was also eager to join us in rebuilding trails and reshaping the land to help protect the environment there more efficiently. It was a great effort, and with the number of people on hand, we quickly had the area looking good.

This was my first trip to Joshua Tree, and I was quite taken by how beautiful it was. There are spectacular views in all directions and the plant and animal life were in abundance. In addition to spotting a couple of the desert tortoises, whose land we were there to protect, I also spotted a snake, a desert hare, and several hummingbirds. I’m told that the area has its fair share of sheep, mule deer, bobcats, and mountain lions as well, although none of them showed their faces while we were in the area.

The one thing that I came away with from this trip was that my stay was by far too short. I need to plan on going back to explore Joshua Tree more fully and take in the wilderness there. This is some of the most pristine, untouched desert on the planet, and definitely worth the trip if you’re headed to California.

I was also very impressed with the commitment and dedication of everyone involved, starting with the folks at Nature Valley and the NPCA. The Mojave Desert Land Trust is also razor focused on achieving its goals, and even the local volunteers were taking ownership of the land that is right in their backyard. It was a fantastic crew, top to bottom, and I felt lucky to have been a part of it.

Nature Valley will be bringing similar events to other parks across the country this summer. At the moment, the plan is to hold six more projects in a various parks such as Yellowstone and Acadia, amongst others. If you’re interested in taking part in one of those, be sure to check out the Preserve the Parks website for more information on when those events will be happening.

4 thoughts on “A Visit To Joshua Tree”