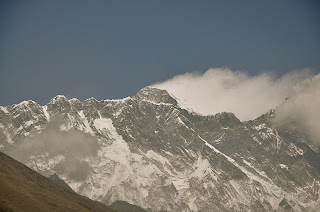 Sad news from Everest today, as we have received word that 82-year old Shailendra Kumar Upadhyaya died while trying to scale the mountain. He had hoped to set a new age record for reaching the summit and prove to the world that elderly people are still strong and vibrant, even after the age of 80.

According to the story, Upadhyaya was making an acclimatization rotation on the mountain and had just climbed up to Camp 1. What exactly happened after he reached that point, which is located at roughly 6096 meters (20,000 ft), remains unclear, and the cause of death hasn’t been determined, but it seems likely that the rigors of the climb were a bit too much for his body to take.

In the original post I wrote about Upadhyaya’s attempt I noted that he had almost no mountaineering experience, and while it is unclear if that had anything to do with his death, the lack of a climbing background certainly didn’t help his cause.

My condolences to Upadhyaya’s friends and family, who probably feared that this could happen.