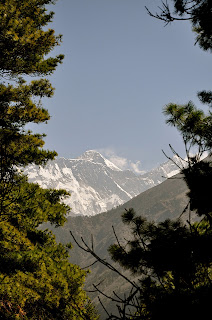 The ever fickle weather on Everest is once again causing some issues for the climbers, but at least for now it seems like a minimal issue. Yesterday I mentioned that a number of teams were moving into position to make a run at the summit late in the week, with most expecting to reach the summit early on Friday morning. But a new weather forecast is changing those plans, at least for some, as high winds are now projected for that day. In order to avoid those potentially dangerous winds, cautious climbers are holding off for an extra day and will now look for a Saturday summit instead.

One of the climbers who was happy to hear the news was Alan Arnette, who is currently in Camp 2 and is looking forward to an extra day there. He’ll take advantage of the situation to rest, conserve his energy, and continue to eat plenty of calories in the hopes that he’ll be more than ready come summit day. Alan, and the rest of his IMG team, will now look for a May 21st summit in the hopes of avoiding the winds.

Also in Camp 2 is Dave Hahn, who is now climbing the mountain sans clients. He was expecting to take father-daughter team Bill and Sara McGahan to the summit, but it wasn’t to be. Yesterday the clients pulled the plug on their expedition and elected to go home, so now Dave and his crew will climb for themselves. If he reaches the top, this will be Hahn’s 14th summit of Everest, the most by any non-Sherpa. He is also expecting to top out on Saturday.

Edurne Pasaban has begun her summit bid as well, setting out yesterday. Her original plan was to summit on Friday, without the use of supplemental oxygen, but the forecast for higher winds may change those plans. Climbing with oxygen in high winds is tough enough, but going with out O’s could be brutal. While she hasn’t updated her schedule yet, I wouldn’t be surprised if her team doesn’t wait out the winds as well.

Finally, some possible good news from the North Side, where the 7 Summits Club reports that the Chinese have promised to complete the rope fixing by Friday, May 20th. This will come as a big relief for teams that have been waiting to get a crack at the summit, and as a result, the 7 Summits Club team has started to move up the mountain. If all goes as expected, they hope to make a summit bid on Saturday morning as well. There is no word on whether or not the high winds will impact the North Side of Everest, and if so how it could alter the rope fixing and summit plans. Stay tuned and keep your fingers crossed for those poor souls on the Tibetan side of the mountain who have been patiently waiting their turn.