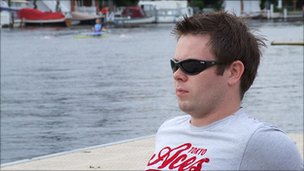 The Indian Ocean has been the site of several ongoing attempts for rowers to cross that body of water, and while some are continuing to make progress toward their goal, others have come face to face with the harsh realities of life out on the water.

Take for example Irish rower Keith Whelan, who was forced to abandon his attempt last week after his boat was stuck by a giant wave off the coast of Australia. The 29-year old was below deck at the time, and fell, striking his head on a bolt in his cabin. The bolt cut the side of his head, and while he wasn’t knocked unconscious,  he was worried about exposure and possible infection.

With that in mind, Whelan made the decision to end his trip, and called home to the U.K. to let his support crew know he was pulling the plug. They then alerted Australian authorities who put out a call for help, which was answered by a freighter passing through the region. He was then picked up and taken back to land.

Reportedly Whelan was quite upset that he had to end his journey early. He was rowing across the ocean to raise funds for the Keep a Child Alive organization, which works to assist children and families that are struggling with AIDS/HIV, and it was tough for him to give up on pursing that goal. Also, for some odd reason, he was making the row completely naked. Presumably, he put some clothes on before he was picked up by the cargo ship.

Meanwhile, Roz Savage is continuing her attempt to cross the Indian Ocean, despite the fact that her GPS chart plotter died on her last week. She has a back-up GPS device of course, but this one had been with her on most of her journey across the Pacific Ocean, and it was a constant companion that counted down the miles to the her final destination.

In true Roz fashion, she seems very upbeat and happy with her progress, although some days are more challenging than others. When the winds and currents are working against her, sometimes all she can do is row all day just to stand still. As of today, she is 41 days into her journey, and still has a long way to go, but this is old hat for Roz, who has already conquered two other oceans.

The four person crew aboard the Indian Runner 4 are also still out on the water and hoping to complete their objective of crossing the ocean in record time. They’ve now been rowing for 53 days, and the plann is to reach Mauritius in less than 68 days, which would establish the new record. With 884 miles still to go, that is going to be a tough hurdle to overcome, but it appears that the crew is well on their way to completing their epic Indian Ocean crossing.