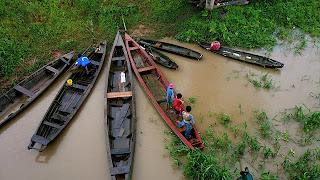 It’s no secret that I’m a fan of Jon Bowermaster’s writing. He regularly posts interesting and thoughtful pieces on his own website, as well as TakePart.com. We both just happen to be contributors at Gadling as well, and today Jon has posted a great piece that looks at five up and coming explorers for the future.

Jon starts the article out by defining just what exploration will mean in the 21st century. As he notes, there really aren’t any new lands to explore and our quest for precious metals and other rare commodities has morphed into a search for alternative energy sources and cures for diseases. He argues that the new area of exploration is more science based and involves as much time in the lab as it does in the field.

With that in mind, Jon does offer us five emerging explorers to keep our eyes on in the future. Those include: Hayat Sindi, who is developing new ways to monitor health and medical needs in developing parts of the world. She is joined by Ashley Murray, who is tackling wastewater issues, and Kevin Hand, a rocket scientist charged with designing a propulsion system to take a probe to Europa. Juan Martinez, who works to inspire youth to get outside, and Tuy Sereivathana, a conservationist who is protecting elephants in Cambodia, round out the list.

If some of those names sound familiar, it is because they are all on National Geographic’s Emerging Explorers list for 2011, which I wrote about back in May. They also represent the changing face of exploration in the new millennium – an era that is also shifting our thoughts on what is important in this field. The days of the stalwart explorer in a pith helmet carving his way through the unknown regions of the jungle are mostly over, and these are the explorers that are going to lead us into the future.