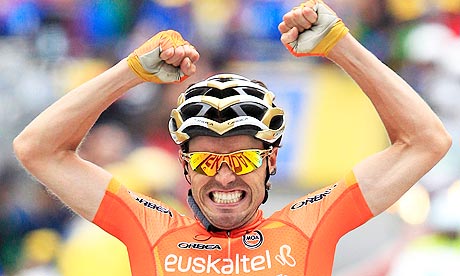 Each year, when the Tour de France announces it’s intended route, fans circle a few dates as the ones that will really sort out the General Classification. Usually those days involve big mountain climbs which leave the Peloton in tatters and give the contenders a chance to rise to the top. Today was just such a day, as the 2011 Tour arrived in the Pyrenees at last.

The day started off rather typical, with a fairly flat beginning, that soon gave way to a slow, but steady climb. That all changed following the intermediate sprint however, as there were big climbs ahead, including two Beyond Category climbs, one of which went up the famed Tourmalet. That was the middle climb of the day however, and while it dropped the pretenders from the crowd, it was the final uncategorized climb into Luz that really brought the dramatics to the forefront.

The stage win went to Sammy Sanchez of Euskaltel – Euskadi, who was part of a break away that survived to the end, although they were nearly caught by the trailing riders. Sanchez finished just ahead of Belgian Jelle Vanendert, with Frank Schleck taking third, after charging up hard in the final stretch of the climb.

Schleck’s move answered a few questions about this year’s race that only the mountains could give. Frank looked in top form as he powered up the Pyrenees, but brother Andy seemed to struggle a bit on the final push. He finished in sixth place, behind Ivan Basso and Cadel Evans, who were 4th and 5th respectively. Basso looked strong, and Evans was calm and collected on the final climb as well.

One name you don’t see listed in that group is defending champ Alberto Contador. He finished in 8th place for the day, but gave up precious seconds to his rivals, second he couldn’t afford to lose when he’s already more than a minute and a half back. Contador looked tired and in pain when he approached the finish line, which is not something we’re use to seeing out of the Spaniard. Perhaps that bad knee is bothering him more than we know.

Another surprise of the day was that French rider Thomas Voeckler managed to hang on to the Yellow Jersey, making a gritty ride which seemed fitting on Bastille Day. He did give up time, but he rode with the heart of a champion with some big mountain climbers he had no business hanging with. There is a good chance he’ll keep the Jersey tomorrow as well, with Saturday bringing the next really tough climbs. With his performance today, Frank Schleck has now moved into second place, 1:49 behind Voeckler, with Cadel Evans now in Third, 2:06 back. Considering that Evans is a better individual time trialist, the Schlecks are going to need to build a bigger gap before the end of the race.

Today was not a day for the sprinters, most of whom just hung on for a finish atop the mountain. As a result, the Green Jersey remained with Mark Cavendish. The climbers did get into the action with the Polka Dot Jersey, and while he was game for awhile, Johnny Hoogerland ended up handing off the King of the Mountain title to Sammy Sanchez. With a lot of climbing in the next few days, it’ll be interesting to see who goes out and gets the points. Robert Gesink, the man who had been in the White Jersey for the Tour’s best young rider, ended up having a horrible day out on the road, dropping back considerably. As a result, Arnold Jeannesson of France has claimed the White, at least for now.

Tomorrow brings us another high mountains stage, although it won’t be as hard as it was today and it ends on a descent, rather than a climb. There is a big beyond category climb in the final part of the ride, but the fast descent will allow good technical riders to catch-up before the finish line, which is flat. The course runs from Pau to Lourdes and is 152.5km (94.75 miles) and is likely to have little change on the GC unless one of the big riders attacks.

Saturday will be a different story. It is a series of Category 1,2, and 3 climbs, ending with Beyond Category climb that ends with another mountaintop finish.