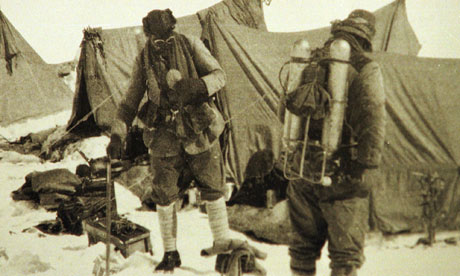 More than 87 years after their deaths on Everest, George Mallory and Andrew Irvine continue to cast large shadows over the mountain. For decades, historians have wondered whether or not Mallory and Irvine reached the summit of the mountain 29 years before Edmund Hillary and Tenzing Norgay. Either way, the two men died on the descent, and created a mystery of epic proportions that still inspires climbers and explorers to this day.

The discovery of Mallory’s body, high on the mountain, back in 1999 has done nothing to clear-up the mystery. As expected, Mallory was not carrying the expedition’s camera when he died, as that duty would have fallen to his teammate Irvine. There are some who believe that that camera is still on Irvine’s body, where ever that may be, and that it could still contain the photos that will prove that the two men went to the summit.

Now, a controversial new expedition is being planned to go in search of Irvine’s remains and the elusive camera. According to this story from The Guardian, American Everest enthusiast Tom Holzel is organizing a team to go to the mountain this December to look for the missing climber’s body. Holzel believes that he has located Irvine, and hopefully the camera, using high resolution satellite images, and he will direct a squad of mountaineers to that location in anticipation of the find. He also believes that if he is correct, the discovery will spark a media frenzy over the find.

This expedition is expected to cost roughly $250,000 and will be filmed by the BBC. The plan is to go during the winter, when few teams are on the mountain, and locate the body without anyone else around.  If they’re successful, and they do find the camera, it could potentially bring an end to one of the biggest mountaineering mysteries of the 20th Century.

But not everyone thinks that that Holzel is handling the search in the best possible way. British climbing legend Chris Bonington has been critical of the expedition calling it “unsavory.” He feels that the plan is trying to capitalize on the find and commercialize the search, with the hopes of making a profit off of the photos. He also feels that the mystery is best left alone and allowed to live as a legend in our minds.

Either way, it seems that the expedition will forge ahead later this year. Climbing Everest in December doesn’t sound like it’ll be the conditions for being on the mountain, and if Irvine’s remains are located high up, they may never get close to him due to the weather conditions. Still, it seems there will be a clandestine team on Everest, looking to solve the mystery of Mallory, Irvine, and the Camera.

There are a lot of obstacles to their success however, and climbing the mountain is just one of them. They may get there and find that the body isn’t even Irvine’s at all. There is the chance that it isn’t even a body, since they are using satellite imagery after all. And even if it is Irvine, he may or may not have the camera. And even if the camera is there, it could be broken, destroying the film inside.

Perhaps the mystery will live on, as it should.