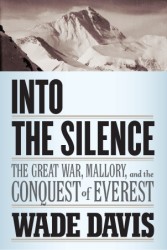 I’ve said it before, and I’ll say it again. Mt. Everest has always captivated the public’s attention and spurred our sense of adventure. The mountain isn’t just the tallest peak on the planet, it is also a physical manifestation of our need to explore and add a little danger and excitement to our lives.

Into the Silence: The Great War, Mallory and the Conquest of Everest by Wade Davis, helps to hammer home this point by tracing the early history of the mountain, how it came to rise to prominence in the minds of explorers, mountaineers, and the public in general. The book features a cast of thousands, with larger than life figures from a bygone era each playing a role in putting Everest on the map – both literally and figuratively.
As you can probably guess from the title, the book focuses on George Mallory and his early attempts to climb Everest. Of course, Davis gives us a detailed and rich account of those expeditions, beginning with their very origins and leading up to that fateful day in 1924 when Mallory, and his climbing partner Sandy Irvine, disappeared just a few hundred feet below the summit. But before he gets there, he spins quite a tale that will enthrall and amaze you.
The story gives us an incredible amount of backstory that includes how the British explored the Himalaya, established relations with Tibet, and established a permanent presence in the region. During that time, several prominent soldiers and explorers began to become obsessed with Everest and getting the chance to climb it, even though there wasn’t even a route established to the mountain itself, let alone up it.
The earliest serious discussions of climbing the mountain took place in the early 1890’s, between explorer Francis Younghusband and Charles Bruce, a soldier in the British Army. The two men would eventually play a vital role in getting those early expeditions organized and funded, but it would take decades for that to happen, and each of the principle characters would change dramatically over those years, and watch the world change around them.
In those days, there were a lot of obstacles to climbing Everest, such as the fact that the region was still largely unexplored and there were a lot of politics to overcome before any expedition could even approach the mountain. But the biggest obstacle of all came in 1914, when World War I broke out, putting the world on pause for the next few years.
The conflict changed the face of warfare and brought a new definition of horror to the men who fought in it. Davis paints a very vivid picture of what it was like on those battlefields and if you’re not already familiar with how the first World War was fought, you’re likely to experience a little of that horror yourself. It was the bloodiest and most brutal war in history, and it had lasting repercussions that lasted for decades to follow.
Following that war however, there was a renewed interest in Everest and the Royal Geographic Society was able to pitch the expedition as a matter of national pride. After all, the Brits had lost the race to both the North and South Pole, and Everest was viewed as the last great challenge. One that the Empire couldn’t afford to lose.
As we all know, it would be another 30 years before Everest would eventually be climbed, but that doesn’t make this tale any less fascinating. The story of Mallory and Irvine and all of the back history that put them on that mountain in June of 1924 is an incredible read, and while at times you’ll think you’ve picked up a history textbook, it all comes together brilliantly. It is hard to believe that there could be a more detailed account of those expeditions or a more accurate portrayal of the men who were involved in the whole affair.
Mallory is almost as captivating as Everest itself, and the man and the mountain will always be linked to one another. This book puts that relationship in perfect perspective and gives you a better understanding of the climber and the challenge that would take his life. If you’re a fan of history, mountaineering, or Everest, than you’ll definitely want to own this book. (Price: $19.34 from Amazon)