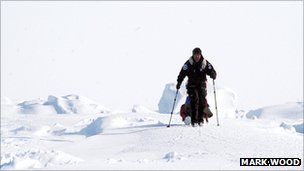 Making an expedition to one of the poles, either North or South, is a demanding proposition. It requires strength, endurance, and mental toughness, as explorers spend weeks at a time, often alone, out on the ice. One man has decided that going to just a single pole isn’t enough for him however, so he now plans to make back-to-back journeys to the North and South Pole.

British adventurers Mark Wood will leave for the Antarctic next week, where he will embark on a solo and unsupported journey to the South Pole. He expects to take roughly 50 days to cover the 680 miles or so to reach that point, at which time, he’ll be collected from the ice by ALE and flown back to Chile. For most polar explorers, that would be the end of the expedition, but for Wood it’ll just be half-way there.

With the first leg of the journey behind him, he will then proceed directly to Canada, where he’ll start the second stage of the expedition – a 65-day, 700-mile trek through the Arctic to reach the North Pole. When he finally reaches 90ºN, he’ll then be picked up by a Russian helicopter and immediately make his way to an international conference on the environment and climate change, during which he is expected to share his thoughts on the effects of global warming on the polar ice caps.

Obviously this will be an incredibly demanding and difficult undertaking. Wood has scheduled himself a modest 50 days in the South Pole, which should be plenty of time, but the North Pole is a completely different beast, and 65-days may not be enough for that stage of the journey. On top of that, if conditions are anything like this past year, the weather may make it impossible to go at all. The journey to the North Pole is far more difficult than going to the South, and climate change has made it even more so in recent years.

Still, it’ll be fun to follow along on this major expedition. I wish Mark all the best, and I’ll be posting updates in the days and weeks to come. If he pulls this off, it will be an incredible accomplishment to say the least.