For the past couple of years we’ve been following endurance runner Jesper Olsen on his World Run II, which began back 2008, when Jesper set out from the northernmost point in Norway and started running south. He ran across Europe and into Africa, crossing more than a dozen countries in the process. And when he hit South Africa, and ran out of land, he simply hopped across the Atlantic to South America, and started running north instead. 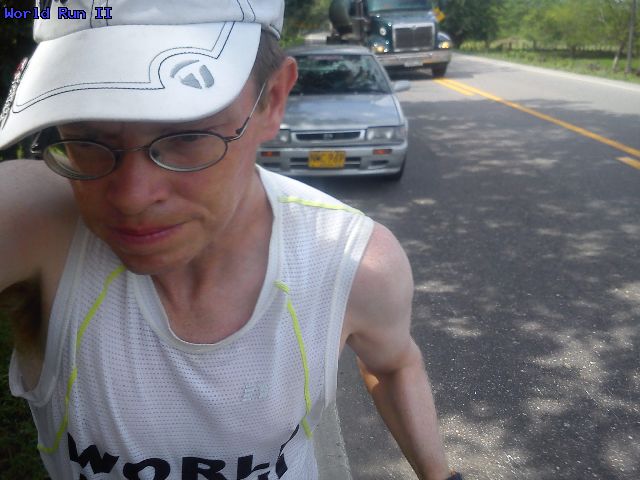 After running through Chile, Argentina, Peru, Ecuador, and Colombia, Jesper is now preparing to leave South America behind and enter the next, and final, leg of his epic 40,000km (24,854 mile) run. According to his last report, he has been waiting in Bogota for a visa for the past week so that he can start the North American leg of the run. If all goes according to plan, he should have boarded a plane for Miami yesterday, which is where he’ll start running once again.
According to the World Run II website, Jesper will resume running in Key West, Florida and hopes to reach the Canadian border by mid-April. After a short break, he’ll then run New Foundland, reaching the end point sometime around early July. The total distance for the North American section, a mere 5600km (3479 miles). When he’s done, Olsen will have completed the longest fully documented, and GPS tracked, run in history, which follows-up his World Run I, which saw him covering 25,000km (15,534 miles) as he circumnavigated the globe.
Entering North America is a major milestone for an excursion like this one. While the physical demands won’t necessarily get any easier, the infrastructure is much improved, allowing athletes like Jesper to follow clearly marked routes, find food and accommodations much more easily, and generally proceed at a better pace. While he isn’t quite done yet, it does appear that Jesper is about to start the home stretch of his expedition.
Thanks to Darrell for keeping me in the loop with Jesper’s progress.