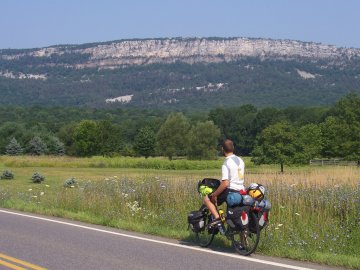 This Saturday, one of the most amazing and difficult races I’ve ever heard of will get underway, when 20 riders set off on the first ever Global Bicycle Race. As the name implies, this competition will send the cyclists competing in it on a round-the-world ride that will be unlike any other.

The race will begin on Saturday at Greenwich Park in London and the riders will then attempt circle the globe, and return to the park, in less than 160 days, which will coincide with the opening of the 2012 Summer Olympic Games that begin in London on the 27th of July. If they do manage to arrive back at the start in under 160 days, it will also represent a new world record for circumnavigating the globe on a bike. That current record is 163 days and is held by race organizer Vin Cox.

There are several possible routes that the riders can take, which you’ll find posted on the race’s website here. Each route covers approximately 29,000km (18,000 miles) and touches four or five continents, depending on which way a rider decides to go. They can also choose to travel either East to West, or vice-versa, with both options providing interesting strategic gambles.

Throughout the race, each rider will carry a GPS device which will not only broadcast their current position, allowing us to follow along at home, but also keep track of the milage that they’ve covered. Riders will also be required to send a text message to update their status at least once a week, and take photos and video of their journey, and visit anti-podal points on the Earth, which is a fancy way of saying they must be opposites sides of the planet. They’re also required to ride the same bike the entire way, although replacement parts are obviously permitted.

Other than that, the riders are allowed to devise their own routes, have their own sponsors, and even elect to have a support team with them. This freedom of approach is an interesting aspect of the competition, and opens up the door for some true adventures along the way.

To find out more about this event, which I’m sure we’ll be hearing a lot more about over the next few months, go to the Global Bicycle Race’s official website.

Good luck to all the competitors.