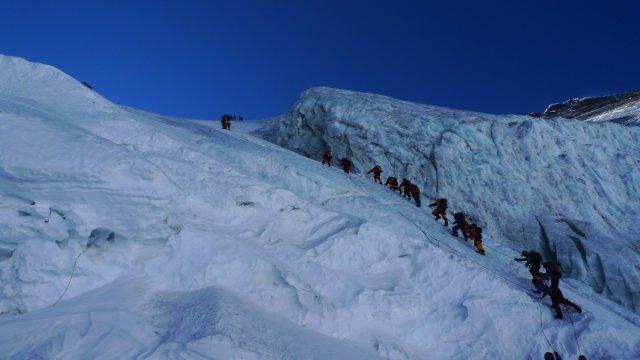 It is an unusual time on Everest to say the least. Weather conditions continue to cause problems and teams are struggling to decide what they should do. The season has been a strange one to say the least and the dry conditions on the mountain are threatening to bring a premature end to the season.

First, an update on Corey Richards. As you’ll recall, the photographer/filmmaker was climbing as part of the National Geographic/North Face expedition on the West Ridge when he took ill last week. After being evacuated from the mountain he flew back to Kathmandu where he underwent a battery of tests that determined what ever it was that made him sick, it wasn’t the altitude. He is feeling much better now, but without a better understanding of why he had issues breathing, he has decided to play it safe and go home. I’m sure he’s very disappointed, and what this means for the expedition as a whole has yet to be seen, but this was the best decision possible all things considered.

Meanwhile, back up in Base Camp, his teammates are resting and undergoing tests of their own. A team of doctors from the Mayo Clinic are there taking reading on the how altitude effects the health of climbers and studying what it does to our over all physiology. Their research could help provide important clues about how we acclimatize and respond to altitude. No word yet on when the Nat Geo team will attempt to head up the mountain again.

Other teams are unsure of if or when that will happen as well. The Himex squad has put their expedition “on hold” while they evaluate the risks of climbing the mountain. Team leader Russell Brice feels that conditions aren’t good at the moment because it is so dry that it is making climbing much more challenging and unsafe, particularly as teams head up above Camp 2. Brice describes the rock fall on the Lhotse Face as “relentless” and says that he doesn’t want to put his climbers, guides, or Sherpas in danger. The only way that face will improve however is if the mountain receives snow and ice in the days ahead, which doesn’t seem likely.

According to the Peak Freaks, the team leaders had a meeting yesterday to discuss these issues a feelings were decidedly mixed. Team leader Tim Ripple says that it isn’t completely doom and gloom there, although he admits their going to need a “perfect mix” of snow and temperatures. He also laments the fact that climate change is having a noticeable effect on Everest as the snows and glaciers have retreated steadily over the years.

The report from the International Mountain Guides camp seems a bit more upbeat. They say that it is not unusual for conditions to be on the dry side early in the season and that May often brings more snow and ice to the mountain. They also report that the Sherpas fixing the ropes have numerous bags of rope in place in Camp 2 and just above the Yellow Band, and they are prepared to continue to build the route when conditions improve enough to allow them to do that. High winds are keeping everyone down low at the moment, but when the window opens, the Sherpas are ready to go.

This weekend should prove interesting on Everest. Hopefully the winds will die down and bring some snow to help stabilize the route. If not, we could be facing one of the most dangerous climbing seasons on the mountain in some time. Hopefully everyone going up and down the peak, from both sides of the mountain, will play it safe.