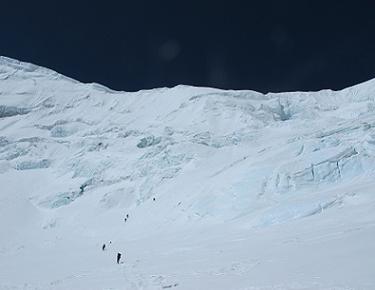 Everest continues to be a source of intrigue this season as teams on both sides of the mountain wait and watch for a window to open that will allow them to begin their summit bids. Today we have news on when those pushes could finally begin and the season’s endgame starts to take shape at last.

On the South Side, the Peak Freaks are reporting that there was a large meeting today between all of the team leaders and Sherpas to decide how to divvy up the remaining work and plan for the climb ahead. They seem to have come to a good agreement on how things will proceed now that Himex is off the mountain, and while the Sherpa team that will fix the ropes to the summit is still down one person, it appears that they are ready to go. High winds are keeping them off the upper portions of the hill right now though, and those winds are expected to stay in place until the 17th of the month if the forecasts are to be believed. That means that the first summits are expected on the 18th, by the Sherpas fixing ropes and the rest of the climbers will follow soon there after as weather permits.

That seems to jive with what Ueli Steck is predicting as well. The Swiss Machine is in Base Camp after going up to C2 for part of his acclimatization process and in his latest dispatch he says that he believes the first summits will take place around the 20th. Of course, he hopes to be amongst them, although just in what capacity and route remains to be seen. I’m sure Ueli would love to go for a speed record himself, but the conditions will have to be right and I’d think he’d have to get out in front of the crowds to avoid bottlenecks along the way. He notes that staying in BC he has started to get accustomed to luxury on a climb. Steck usually goes in light and fast, alpine style so sitting in large, warm tents with plenty of food and amenities hasn’t been a common experience for him. Sounds like he could grow to like it!

The IMG squad checked in today with good news from higher up the mountain. Not only is the route now open to the South Col, but the Sherpas working higher up say that the Balcony is in good shape too. The Balcony is one of several rocky outcroppings that climbers must overcome on their way to the summit and in past seasons it has often been an obstacle that has led to traffic jams. It seems this year this particular landmark is looking good, with plenty of snow to help facilitate the ascent. That’s good news for those that will be approaching it in the days ahead.

After spending some time up in Camp 2, Ian Ridley is now down valley in Gorek Shep where he is enjoying a glorious shower. He returned to BC yesterday after his latest acclimatization round and he’ll now spend some time at lower altitude recoverying before proceeding back up as well. Like most of the other climbers, he is more than eager to get started on the summit push.

On the North Side of the mountain things are faring a bit better. The Altitude Junkies report that their Sherpa teams are currently in Advanced Base Camp after stocking Camps 1 and 2 with supplies and bottled oxygen. Tomorrow the porters will go up to C3, located at 8300 meters (27,230 ft) to cache gear there as well and after that they’ll all just wait for the weather window. The forecast says that should come next week as well, which means the North Side teams could be making their approach to the summit first for a change.

Ever wonder what it is like for the climbers while they’re on an acclimatization round? Then you’ll want to read Grant Rawlinson’s latest dispatch. He’s just returned to BC on the North Side after four days at altitude and he gives a good description of what that is like. In short, it can be a miserable, uncomfortable experience to endure, as the lack of sleep, energy and appetite can take its toll. Still, it is a necessary part of any big climb and Grant’s insightful post helps to explain that.

So there we have it. Seems like the action is poised to take place next week. It should be an exciting time on the mountain to say the least. I’ll post more updates as the schedule gets clearer and events unfold.