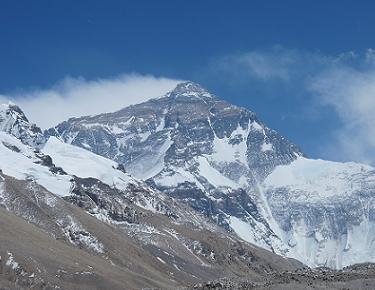 Not a lot of news from Everest today as everyone sits, waits and watches the weather. This is likely to remain the pattern over the next few days while team leaders watch the forecasts, bide their time and consider the best opportunity to start their summit bids.

The National Geographic/North Face team had a bit of a scare yesterday when climber Phil Henderson ran into some trouble on his way up to Camp 2. Phil is attempting to become the first African American to summit Everest, but it hasn’t been easy going for him so far. Yesterday the group was on its way up the mountain, but Phil was a bit slow in following. Apparently this isn’t unusual and the other climbers didn’t think much about it, but a couple of hours after they arrived at C2 there was a radio call from Phil saying he needed help – and oxygen! Sherpas rushed to his aid and they helped him back down the mountain, where he is reportedly feeling better now, but it sounds like he was having a hard time catching his breath and was really struggling on the route. Lets hope he’ll be in better form when it comes time to go for the summit.

Dave Hahn checked in with RMI to report on that team’s progress. He says their Sherpas have now established Camp 3 and are waiting in C2 to see if the weather clears. If it does, they’re likely to move up to C4 this weekend or early next week in order to take advantage of a possible weather window around the 18th of the month. I haven’t been covering the RMI squad all that closely this season, but if Dave manages to go to the top this year, he’ll earn his 14th summit of Everest, extending his record for the most climbs by a non-Sherpa.

Bill Burke is currently back in Kathmandu and preparing to leave for Tibet and the North Side of Everest.  As you may recall, Bill hopes to make a double summit of the mountain, once from each side, but with things at a stand-still in Nepal, he’s decided to try his luck in the North instead. He’s currently enjoying a real bed, good food and a little wine in Kathmandu but he’ll set off for Tibet tomorrow, where he hopes to have a better chance at topping out. Time permitting, he may still go back to the South Side in a few weeks and attempt his second summit.

Kenton Cool and his team are up to Camp 3 on the South Side and waiting just like everyone else. Kenton is going for his 10th summit of the mountain but seems eager to get the climb over with and head home as well. In a recent video blog he noted that he has been really homesick on this expedition, which hasn’t helped his spirits much. He is still dedicated to taking the 1924 Olympic gold medal to the top, although something tells me that once that mission is complete, he’ll be heading home as soon as possible.

On the North Side things are starting to fall into place for the 7 Summits Club team as well. They’ve now broken the climbers down into two teams with the first eight going up on one day and the other seven following behind the next. They are projecting the first summits of the season from the Chinese side of the mountain to take place around May 20 or 21. That would put them in position next weekend, provided the winds drop and the weather holds.

Like the climbers, we all sit, wait and watch.