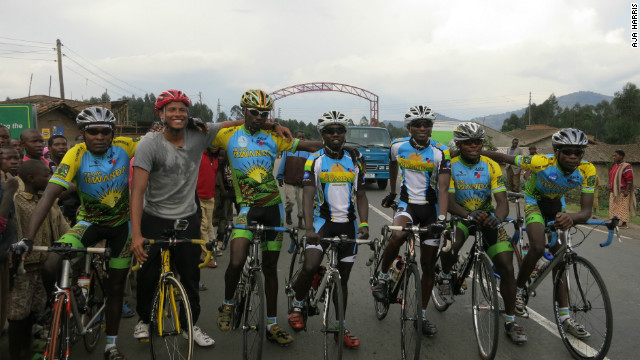 I received a tip on this story while I was away in Jordan, and even though its a bit older now, I thought it was well worth sharing. According to this story from CNN.com, members of Team Rwanda, the official cycling squad of the African country, are heading to London for the Olympic games where they’ll cheer on one of their teammates who will be competing there. The squad was formed back in 2007 and consists of members who all survived the horrible 1994 genocide that still haunts the country to this day.

As you can imagine in a poor and developing nation, bicycles are not a common piece of equipment. At least not the modern, high tech bikes that we’re use to. Instead, many of the riders start off on heavy bikes made completely out of wood. Those ponderous contraptions are generally built from acacia trees and while they are very sturdy, they aren’t exactly the most sturdy vehicle on the road. In fact, they are actually banned from the busiest streets in Rwanda because they are so cumbersome and difficult to stop.

In 2006, the country hosted its first annual cycling festival, which was founded by former Tour de France rider Jonathan Boyer and Tom Ritchey, who was amongst the earliest mountain bike riders. They called the festival the Wooden Bike Classic and the event continues to grow in popularity to this day. The winner of that first event, Adrien Niyonshuti, would be one of the founding members of Team Rwanda as well, and this summer he’ll compete in the 2012 London Olympic games.

For those unfamiliar with the Rwandan genocide, it was perhaps the worst 100 days in the history of our planet. During that relatively short period it is estimated that 800,000 people were killed in ethnic fighting. It was the culmination of many years of tension and strife between the Hutu and Tutsi peoples, with the Hutu conducting murders on a mass scale.

As you can imagine, Rwanda’s past has left deep scars that are still healing today. But it is a place that has a lot to offer visitors and its people are working hard to change the perception of the African nation. It must be incredibly satisfying for them to be sending athletes to the Olympic games and that one of them is a cyclists, with deep roots in the country’s culture, is a pretty great story.

Thanks to Alan for sharing the link!