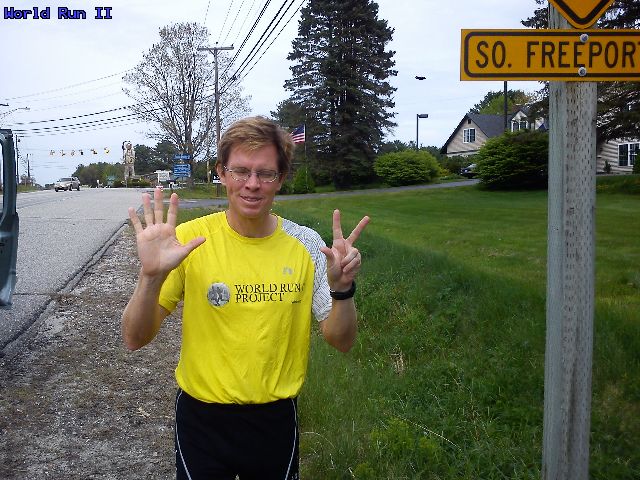 I haven’t posted an update on Jesper Olson and his World Run II expedition since January, which was when he was starting the North American leg of the journey. Now he’s nearing the end of that leg and has passed a major milestone along the way.

For those who aren’t familiar with Jesper’s epic undertaking, back in 2005 he completed the first fully documented run around the world, which for most of us would be enough of a challenge for a single lifetime. But in 2008 he decided to hit the road once again, this time running north to south and back again. He dubbed this second challenge the World Run II and starting from the northernmost point in Finland Jesper started running south. The route took him all the way across Europe, through the Middle East and down down Africa, before reaching the tip of that continent. From there he hopped a flight across the Atlantic and resumed running again, this time heading north through South America and eventually North America as well.

Currently Jesper is running through Maine and quickly approaching the U.S.-Canadian border, where he’ll soon cross over and start the final leg of his journey, which will eventually end on Prince Edward Island. He still has a few more weeks of running before he reaches that point, but he is most definitely closing in on the finish line at long last.

A few days ago Jesper crossed a major milestone on World Run II. On May 15 he crossed passed the 35,000km (21,748 mile) mark. Thats an impressive distance to have run and eclipses World Run I by a considerable margin. On his original run around the world, Olson managed to cover 26232km (16,300 miles), but he passed that mark a long time ago and has passed into uncharted territory.

Recently Jesper lost part of his support crew so now he’s also being forced to run while carrying a backpack. That added weight has changed his approach some, but he continues moving forward at a surprising pace. On the day that he crossed the 35,000km mark he covered 51km (31 miles), which is very impressive considering he’s been running long distance nearly every day for four years.

As always, thanks to Darrell for keeping me updated wit Jesper’s progress. It is such an amazing accomplishment that he is closing in on, although it sure makes my nightly five mile runs seem pretty insignificant.