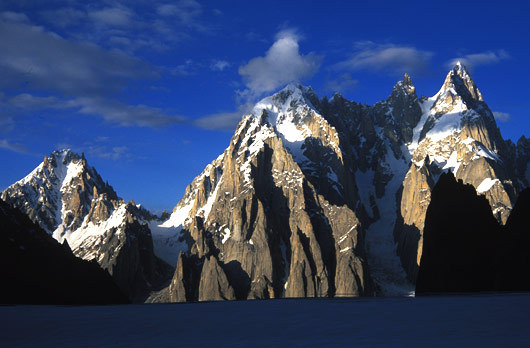 The climbing season in Pakistan had seen a definite shift this past week as teams on Gasherbrum I and II, as well as Broad Peak, have elected to head home without a single summit amongst them. They were defeated not by the mountains themselves but by the weather, which has been persistently bad all summer long. But there appears to be some hope on the horizon as long range forecasts say there could be a shift in the weather in the early days of August. That is good news for the teams on K2 and a few other peaks.

Lets start this update off with a success story for change. A team of Slovenian and American climbers successfully topped out on K7 last week along a new route. According to Rock and Ice, Hayden Kennedy, Kyle Dempster, and Urban Novak went up the 6935 meter (22,757 ft.) mountain along its East Face. The summit push began when a weather window opened on July 16 and included a night spent in an open bivy as they pushed through incredibly tough mixed terrain and deep snow. The trio managed to force there way through those conditions however and topped out on the 19th before returning to Base Camp on the 20th. Congrats the whole team on a great effort in tough conditions.

On Gasherbrum I another team has decided to pack it in for the year. The Hungarian squad that had hoped to scale the 8080 meter (26,509 ft) mountain was turned back on their summit bid due to heavy snow and avalanche dangers. They posted an update yesterday that said they would depart BC today and begin their journey home. They report that GI Base Camp isn’t completely deserted yet, but few remain to try to climb the mountain again.

For the next few weeks our attention will shift to K2 where the teams are gearing up for the tough climb ahead. The weather remains dicey there as well and Tunc Findik reports that attempts to climb up to C2 were aborted due to continued high winds and heavy snows. He is holding out hope that things will change after August 1st however and he and his teammate can start climbing in ernest.

Peter Hamor reports similar conditions and although his latest dispatch today is short and sweet, its meaning is unmistakable. The weather dictates the action at this point and for now the team remains in Base Camp. The same place they’ve spent most of the week.

Al Hancock arrived in K2 BC on Wednesday and has started getting comfortable for the challenges ahead. He and his teammates have already carried some gear up to ABC, with Al falling into a covered crevasse up to his armpits along the way. Their porters hoped to begin shuttling gear up to the high camps today but as with all things right now, that plan was “weather permitting.” Al, who just shuffled over to K2 from Broad Peak, says that Base Camp is colder and more lonely, but it is his “office” for the job ahead.

Finally, the Trango Air Wall Expedition team checked in from the Baltoro Glacier yesterday. After arriving in Islamabad on Sunday and making their way to Skardu on Tuesday, they started the trek to Nameless Tower from Askole and will now take a few days hiking before getting to Base Camp. Most of their gear arrived safe and sound but they are missing one bag that contained solar panels and a tent. That means they could be limited on communications while on the climb and they may all have to squeeze into one tent or dig snow caves along the way. They do however have all of their climbing and BASE jumping gear, which is most important for the success of the expedition. They should arrive in BC early next week and start the tough climb up the Tower.

That’s all for now. Lets hope the weather changes next week so there is actually some climbing news to report.