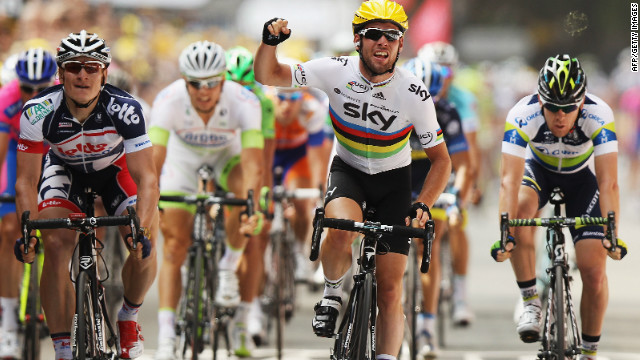 As most of you no doubt know by now, the Tour de France got underway this past weekend with a Prologue on Saturday and the first two stages yesterday and today. In true Tour fashion, early on there are moment of fireworks between the riders, but there is also a lot of time spent simply holding positions and trying to stay out of trouble. As other, more wiser, Tour observers have said in the past, you can’t win the Tour de France in the first week, but you can sure as hell lose it.

With that in mind, the riders took to the streets of Liège, Belgium to ride a short 6.4km (4 mile) Prologue that would determine the standings in the race for the first stage yesterday. That Prologue was won by Fabian Cancellara who has made it a habit of grabbing the Yellow Jersey at the beginning of the Tour over the past few years. Cancellara is an individual time trial specialist who is tough to be on a  one-on-one basis out on the road, but he is no contender for the title in Paris. Still, he will defend that jersey to the best of his ability and will likely hold on to it for at least this week.

Yesterday the riders hit the road for the first time on a 198km (123 mile) ride from Liège to Seraing. The course featured a few rolling hills, which gave the climbers a chance to strut their stuff, while the sprinters had just one opportunity to earn points towards the green jersey. The route featured a tough uphill finish helped to separate the peloton into groups, but none of the GC contenders really struggled or gave up any time. At the end of the day it was talented young rider Peter Sagan of Team Liquigas-Cannondale that pulled of the stage win, with Cancellara close behind.

Today’s Stage 2 was much flatter, which allowed the sprinters to take center stage. It ran from Visé to Tournai and covered 207km (128.6 miles) across the Belgian countryside. Because it was so flat, it allowed the top sprinters in the world to go head to head with one another in the final few kilometers and once again it was no surprise that Sky Pro Cycling’s Mark Cavendish came out on top. Cavendish has been one of the best sprinters in the world over the past few years and has won his share of Tour stages as well. He was fallowed by André Greipel and Matthew Harley Gross, who finished in second and third.

So as of now, the overall standings have Cancellara in Yellow, just seven seconds ahead of Bradley Wiggins, also of Sky Pro Cycling, and Sylvain Chavanel of Omega Pharma Quickstep. Other GC contenders are lurking in the pack, with Denis Menchov in 6th place overall, defending champ Cadel Evans in 8th and Ryder Hesjedal in 10th. Of course, there is three weeks of racing to go, so those standing will be scrambled a few times before we start to get a clear picture of who will be battling it out in the mountains.

Cancellara also leads in sprint points at the moment, which means he also owns the Green Jersey. He’s allowed Peter Sagan to wear it out on the road while he is in Yellow however, and by the time he drops the Yellow Jersey, someone else is likely to already have claimed the Green. There haven’t been a lot of climbing points to give out just yet, but Michael Morkov of Team Saxo Bank-Tinkoff Bank wears the Polk Dot Jersey of the King of the Mountains at the moment, while American Tejay Van Garderen of BMC Racing holds the White Jersey for the best rider under 25. Van Garderen is also in the 4th overal position of the GC as well.

Tomorrow’s stage will enter France for the first time and will cover 197km (122.4 miles) between Orchies and Boulogne-sur-Mer. The profile starts out flat and easy but builds into some rolling hills late in the stage and will once again feature an uphill finish. That means that the sprinters won’t be dueling it out at the end so watch for Cancellara to be up near the front, as he was on Sunday, in an attempt o build a cushion for himself in the days ahead. The stage has some potential for a strong climber to survive a breakaway, but whether or not anyone can actually do it remains to be seen.

Personally, I like the course so far this year. They’re mixing things up in the early going to ensure it isn’t just the sprinters who get to have some fun. That makes these early stages a bit more interesting and it means the GC riders will have to pay attention at all times or risk giving up precious time.