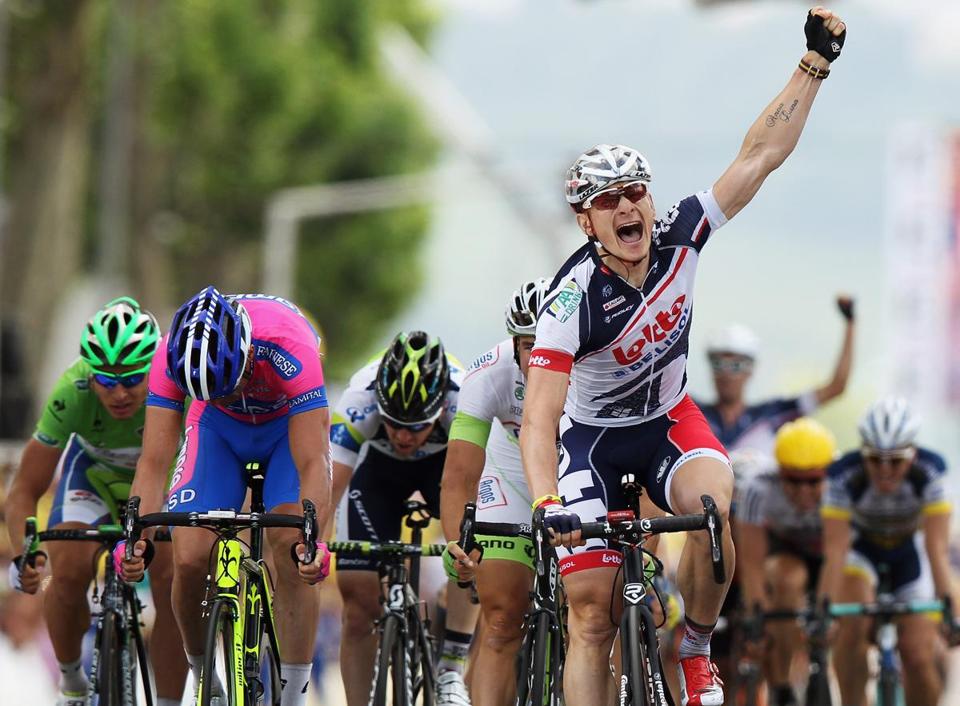 The past two days on the 2012 Tour de France have been tailor made for the sprinters and while they managed to put on a display of speed and power, it may have been the untimely crashes that have had the biggest impact on the outcome.

Both Stage 4 yesterday and Stage 5 today were mostly flat and uneventful. In both cases early breakaways attempted to steal glory for a few daring riders, and in both cases those breakaways were reeled back in not far from the finish. Today’s breakaway for example, managed to stay away for the entire day, covering some 197km (122.4 miles) only to be swept up in the last 150 meters before the end. The two stages also featured major crashes involving some of the top riders within 3km of finish line as well.

But the similarities don’t end there. Stage 4 and 5 both ended with furious sprints to the line, with German rider André Greipel of Team Lotto-Belisol claiming the victory. Those two strong wins show that Greipel, with help of his teammates, can hang with the top sprinters in the fieldas he managed to beat the likes of Matthew Goss, Mark Cavendish and Alessandro Petacchi in the past two days.

Those stage wins have been good ones but they’ve had no impact on the overall standings of the race. Fabian Cancellara remains in Yellow and is likely to stay there until Saturday’s first mountain stage. The true General Classification challengers are all lurking close by on the leader board, including Bradley Wiggins, Sylvain Chavanel, Cadel Evans, and Ryder Hesjedal.

Petar Sagan rides in the Green Jersey as the top sprinter at the moment, but he was involved in a late crash today that has allowed a few other riders to close the gap in points. Michael Morkov holds on to the Polka Dot Jersey as the King of the Mountain, but the past few days have offered few opportunities to earn any points in that competition. Tejay Van Garderen still wears the White Jersey for the Tour’s best young rider with a one second lead over Edvald Boasson Hagen.

Tomorrow’s Stage 6 covers 210km (130.4 miles) between Épernay and Metz. It will once again be a mostly flat stage although it will offer a few more climbs than what we’ve seen over the past few days. The riders, and in particular the sprinters, should enjoy it while they can, as Friday and Saturday will bring the first big climbs of the year and a probably shakedown at the top of the leader board.