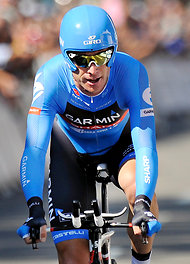 American riders once again claimed the top three positions at the USA Pro Cycling Challenge which concluded yesterday with a short time trial on the streets of Denver, Colorado. The seventh, and final stage, capped a week of racing through the Rocky Mountains on a course that featured 50,000 feet of climbing and plenty of altitude.

The first place finisher was Christian Vande Velde of Team Garmin-Sharp-Baracuda. He finished 21 seconds ahead of Tejay Van Garderen of Team BMC Racing and 24 seconds in front of defending champ Levi Leipheimer of Omega-Pharma-Quickstep.

The 863-mile long race was a fast and furious one all week long with daring breakaways and tough showdowns on Colorado’s mountain slopes. Throughout the week Vande Velde and Van Garderen challenged one another for the lead with virtually no difference in their times. Yesterday Vande Velde managed to finish the 9.5 mile (15.2km) time trial ahead of Van Garderen, giving him the victory on the final day.

It seems it was another successful year for the fledgling race, which got off to a great start in 2011 and was viewed as an excellent event again this year. Hopefully the future is bright for this race, which has attracted some great riders from all over the world.

Congrats to Vande Velde on a well deserved win.