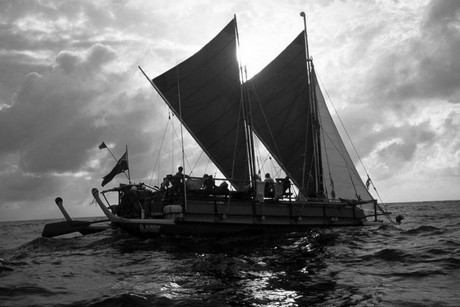 There is absolutely no denying that technology has had a dramatic impact on our way of life, both for good and for ill. Thanks to our ever-growing reliance on gadgets, we now lead lives that keep us constantly connected to friends, family, work and the world at large. Those gadgets have brought a lot of convenience to our everyday lives, but they have also made things so easy that we sometimes forget what life was like without them. That’s why this next story is such a compelling one.

Later this week a crew of 24 Māori sailors from New Zealand will set out on a grand adventure. The group will depart from their homeland and attempt to sail 10,000 nautical miles (18,520 km) to Easter Island, one of the most remote places on the planet. That in and of itself has the potential to be a grand adventure, but these men will make that journey without the use of a GPS or any kind of navigational maps or charts. They don’t even intend to bring a compass, something unheard of in the days of modern ocean exploration.

For centuries the Polynesian people sailed the South Pacific without those conveniences however and this group will rely on the ancient methods of their forefathers to reach their destination. According to the expedition website, the team will instead use their knowledge of the movement of the stars, the sun and moon and ocean currents to help them locate Easter Island, a tiny speck of land in the middle of the Pacific Ocean.

Navigating through traditional means isn’t enough of a challenge for these two-dozen individuals however as they’ll also be making the journey aboard two double-hulled sailing canoes that are not unlike what their ancestors would have used to explore the islands of the South Pacific. According to the expedition website, there is no record of a voyage like this one ever being undertaken and its success could shed new light on how the Polynesian people spread out across the ocean.

Thanks to CuChullaine of the Long Riders Guild for sharing this story with me. Simply amazing!

3 thoughts on “Voyage To Rapanui: Sailing The Pacific Without The Help Of Modern Technology”