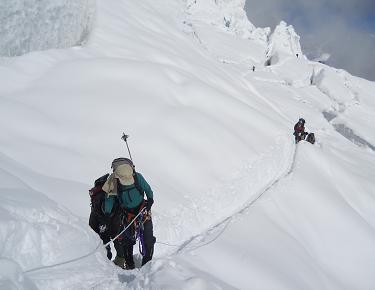 Now that a couple of days have passed since the massive avalanche hit the upper slopes of Manaslu, teams are beginning to take stock, figure out their next move and plan where they go from here. Now that a relative calm has fallen over the area, we’re also getting a clearer picture of just what happened at 6800 meters (22,309 ft) in Camp 3 when the avalanche struck.

It appears that the massive snow slide started when a serac collapsed above 7000 meters (22,965 ft), tumbling down the mountain and igniting an avalanche from the nearly two meters of fresh powder that had fallen last week. That snow hit the tents in C3, where most of the climbers were still sleeping or only just started preparing for the day ahead. The entirety of Camp 3 was pushed down the mountain and the avalanche was powerful enough to even bury tents in Camp 2, located at 6400 meters (20,997 ft).

Reports indicate that there are now nine confirmed dead with up to six climbers still missing. Obviously rescue operations are on going, although there is little hope of finding one of the missing climbers still alive at this time. Yesterday there were numerous helicopter flights to pick up the injured and the dead to return them to Kathmandu. As many as ten climbers survived the avalanche but were injured, in some cases severely, in the accident. Most are now being treated in hospitals for those injuries.

Most of the big commercial teams remain on the mountain and have begun to issue statements about the situation and their plans for the days ahead. The Mountain Professional report that they had just left Camp 1 when the avalanche hit, and as soon as they got word of the accident, they elected to turn around and head back down. All of the members of the team are safe and fully accounted for in BC, where they are assessing the situation. They remain confident that they can still make a summit bid in the days ahead, but for now they’re standing by to assist where needed.

Similarly, the Altitude Junkies are all safely in BC as well, although some members of the squad were in Camp 2 when the avalanche hit that area. They suffered minor injuries from the incident, although they are mostly just bumps and bruises. The latest update that members of the team are experiencing nightmares and trauma following the accident, which is highly understandable considering the circumstances. Three of those climbers will depart Base Camp tomorrow and return to Kathmandu before heading home. The others will remain on the mountain and asses the situation before moving up. This morning’s dispatch does indicate that some teams have already launched their summit bids however.

Finally, the Himex squad checked in with an update today as well. All of their climbers were safely in BC at the time of the accident and are also completely safe and sound. As you can imagine however, it was a busy day yesterday while everyone scrambled for information and did what they could to lend a hand. It seems Himex boss Russell Brice helped to coordinate rescue operations on Manaslu, despite the fact that none of his climbers were involved. In his most recent dispatch, Brice talks a bit about the challenges of coordinating just such an operation. He also lent some of his very strong Sherpa team to assist in helping injured climbers down and in search operations. The team will begin their summit push soon, and Russell says that they will continue to look for the missing climbers as they go up.

That’s the latest news from the mountain. It seems a sense of muted normalcy has returned their. Some climbers are clearly still shaken from the affair, with a few deciding to go home. Others have to now get focused on the task at hand, namely safely climbing up and down the 8th tallest mountain in the world. Activity will resume in the next day or two and then it’ll be a busy time on the peak.

3 thoughts on “Himalaya Fall 2012 Update: Picking Up The Pieces On Manaslu”