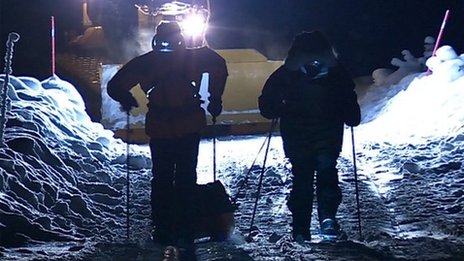 British explorer Sir Ranulph Fiennes, who has made a career of trekking in the cold areas of our planet, is preparing for what could be his most challenging expedition to date. According to the BBC, 68-year old Fiennes is planning to travel to the South Pole on skis in the dead of winter, something that has never been accomplished before.

The expedition will begin on March 21st of next year, the exact start of winter in the southern hemisphere. Sir Ran and his six-person team will then embark on a 3200km (2000 mile) journey that will begin and end on the Ross Ice Shelf with the South Pole serving as the turn-around point. Along the way they expect to face temperatures in the neighborhood of -90ºC/-130ºF as they climb 3000 meters (9842 ft) up to the polar plateau.

As usual, Fiennes and his teammates will be on skis, dragging sleds loaded with gear and equipment with them as they go. But because of the extreme nature of this journey, they’ll also be joined by two bulldozers dragging “industrial” sleds behind them that will contain all of their extra supplies and fuel. This will enable the expedition to be self-sufficient on their way to the Pole and not require supply drops, although it is certainly an unconventional approach. Then again, traveling to the South Pole in the dead of winter isn’t exactly conventional no matter how you look at it.

Fiennes and his team have already started testing gear for the expedition and are working out the logistics of the route. The equipment they’ll be using has to be the best ever created, because not much can withstand the brutally cold temperatures of the Antarctic winter. The lead skiers will also be dragging ground penetrating sonar with them which will alert the vehicles behind them to any hidden crevasses in the snow and ice. The vehicles, while necessary, bring other complications as well, such as how to keep the engines from freezing up when they aren’t moving.

Obviously this will be a big expedition that we’ll be following once it gets underway next year. It is expected to take about six months to complete the journey, which will be a challenging one to say the least.