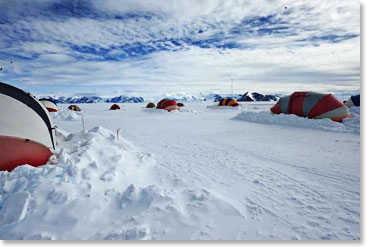 Yesterday’s report from the Antarctic was filled with doom and gloom as high winds and bone-chiling temperatures made things tough on the climbers and skiers alike. But today we get a new boost of optimism as the skies have cleared and improved conditions move into the region. There is still plenty of work to be done of course, but this break comes at just the right time.

On Mt. Vinson, the tallest mountain on the continent at 4892 meters (16,050 ft), the teams seem poised to make summit bids starting today and ending tomorrow. According to the latest dispatch from Berg Adventures, the winds tapered off yesterday afternoon, bringing a surprising calm to the mountain. That gave the climbers an opportunity to catch their breath, dry their gear and prep for the summit attempt ahead. They’ll set out for High Camp today if the forecast looks promising, then re-evaluate tomorrow to judge if they have the necessary window to go for the summit. It’s too early to tell for sure, but things are looking promising.

Dispatches from both the Adventure Consultants and IMG report similar news. Those teams are waiting for better weather data too, but they’re also eying summit attempts for tomorrow. It seems that everyone is feeling good and are ready to go, they’re just waiting for the opportunity. Having patience is tough at this point, but safety dictates that they weigh in all the factors before proceeding up. The forecast seems favorable though, so expect the first summits of the season as early as tomorrow.

Meanwhile, back in Punta Arenas, the RMI Vinson team has gathered and they are preparing to depart for Antarctica as well. They should have their last pre-depature briefing with ALE today, then set out for the mountain later this week, that is once again provided the weather cooperates.

The climbers aren’t the only ones who are enjoying improved conditions. Aaron Linsdau reported that the winds died down for him as well and it was almost eerily quiet on the frozen continent. That allowed him to cover 7 nautical miles (13 km) yesterday as he struggled to regain strength and energy from a brutal day before. Aaron, who is attempting to make a round trip journey from Hercules Inlet to the South Pole and back, covering 1400 miles (2253 km) in the process, has announced a slight change of plans for his expedition. In order to lighten his load and hopefully travel more quickly, he will now drop off some of his supplies and gear at a depot and ALE will then pick it up and deliver it to points further along the trail. This will remove the “unsupported” status from his journey of course, but if he has any hope of completing this quest, he needs to find some way to get moving faster. As a result, he’ll spend most of the day today traveling east, rather than south, so he can drop the supplies in a proper location. Hopefully this move will help him to start making up ground, although considering the mileage deficit he is already in, I’m not sure if it is possible for him to complete the expedition as planned.

Icelandic solo skier Vilborg Arna Gissurardóttir doesn’t seem to be having the same problems covering distance. Yesterday she knocked off another 20 km (12.6 miles) and seems to be having a rather pleasant time doing it. Of course, she does have the benefit of traveling much lighter than Aaron as her expedition has always had its finish line locked in at the South Pole, roughly half the distance that Linsdau is traveling. Vilborg hopes to become the first woman from her country to make that journey solo and unsupported, and right now she is more than on track to do just that.

Things are really getting interesting in the Antarctic and tomorrow should be a busy one on Vinson. Plenty more to come from that mountain as well, as the season is just ramping up there.