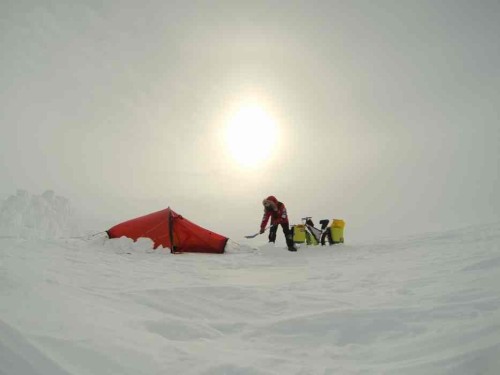 It has been nearly two weeks since I we last looked in on the Antarctic explorers. During that time, they’ve welcomed the arrival of a new year, although they still continue to head south. For some, the finish line has drawn much closer, although they still have a long way to go and many challenges to face before they’re done.

No one has faced more challenges this Antarctic season than Aaron Linsdau. He was the first South Pole skier to hit the ice this year as he attempts to become the first American to make the journey from Hercules Inlet and back again, solo and unsupported. The unsupported portion of his expedition went away when he had ALE place supply caches for him in an effort to pick-up speed, but he is still pressing forward none the less. As of yesterday, Aaron was now past the 87th degree and estimated that he had another 160 miles (257 km) to go before he reached the Pole. Those won’t be easy miles however, as he reports that he has been battling sastrugi over the past few days, which has slowed progress and made things more difficult physically. His intel reports that he’ll have another 45 miles (72 km) of sastrugi to overcome before the ground smooths out again, which will mean about four more days at his current pace.

Aaron also reports that he has climbed in altitude and that he is now experiencing colder temperatures as a result. The temps have dropped so much that he now has to keep his water bottles inside his sleeping bag to prevent them from freezing at night, which hasn’t been a particular problem until now. That isn’t his only concern however, as the colder temps have brought on another case of the chilblains, this time on his stomach. This painful and irritating condition is the result of cold temperatures and humidity effecting the skin, causing itching, blisters and inflammation. He is taking steps to prevent the affected area of his skin from getting worse, but it is an irritant that he didn’t need at this stage of the expedition.

At his current pace, Aaron is roughly 10-12 days away from reaching the South Pole. It is my guess that he’ll abandon his attempt to turn around and go back to Hercules, as he simply isn’t covering the distances he need to make a return trip, even if going back is easier and faster. He has now been out on the ice for more than 60 days and the 700+ mile (1120+ km) journey back just isn’t going to be feasible. Still, he has put in a great effort to stick with his expedition, even though things haven’t exactly gone as planned.

Meanwhile, Icelandic solo skier Vilborg Arna Gissurardóttir continues to make excellent progress on her way to the Pole. Today is her 45th day out on the ice and she is narrowing in o the finish line as well. Right now, she’s about 10-11 days out, which means she should arrive at about the same time as Aaron. She crossed the 87th parallel a few days ago and is just systematically knocking off 20 km (12.1 miles) per day right on schedule. If successful, and I don’t see any reason why she won’t be, Vilborg will become the first woman from her country to complete this journey solo and unsupported.

Richard Parks celebrated the first day of the New Year by knocking off 33 km (20.5 miles) in nine hours of skiing. Those are some impressive numbers of course, but it wasn’t an easy day none the less. Parks blogged about hitting a stretch of bad weather that allowed him to cover just 3 km (1.8 miles) in two hours of skiing, but once he broke free from a nasty headwind, and the skies cleared over head, he was able really pick up speed and gain momentum. After 15 days on the ice, he has already covered some serious ground, and despite some logistical challenges at the start of the expedition, he is on pace to complete the journey as expected.

Finally, while I was away Eric Larsen made the decision to end his attempt to become the first person to ride a bike to the South Pole starting from Hercules Inlet. Over the past two weeks he has discovered just how challenging that ride would be, battling ferocious winds and horrible surface conditions along the way. Yesterday he blogged about how important it is to stay on guard at all times, as the bike isn’t exactly stable on the snow and ice, even with its nearly 5-inch wide tires. Eric has crashed on multiple occasions when hitting a particularly slippery piece of ground and as a result, his body is a bit beaten up as well. He is now on his way back to Hercules, and while he isn’t happy with the situation, he knows that it was the correct choice. This is a man who has spent a lot of time in the polar regions of our planet and he knows from experience when things just aren’t right. I’m sad that he has decided to call it quits, but at respect the decision to pull the plug.

Now that the holidays are behind us, stay tuned for regular updates once again.