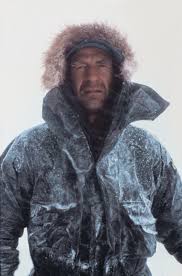 One of the biggest upcoming expeditions that I have been anticipating is the first-ever winter crossing of Antarctica led by Sir Ranulph Fiennes. The 3200km (2000 mile) journey would test even the heartiest of explorers, exposing them to temperatures as cold as -90ºC/-130ºF as they battled incredibly high winds and massive snow storms in what some consider the most challenging polar adventure left to do. Today we learned however that Fiennes has now been forced to pull out of the expedition after contracting severe frostbite while training.

Fiennes and his teammates have been in the Antarctic for several weeks now, putting the final touches on their preparations to launch their trans-continental trek. He and his companions were on a training exercise when Fiennes took a spill, damaging his ski bindings in the process. The famous explorer than proceeded to remove his gloves to fix the bindings in -30ºC/-22ºF temperatures which caused the frostbite. He is now waiting evacuation from the Antarctic to return to South Africa to receive treatment.

This isn’t the first time that Fiennes has had to deal with frostbite. The veteran polar explorer has contracted it in the past on his numerous expeditions to the cold regions of our planet. In 2000, while traveling solo to the North Pole he had to be evacuated for the same reason. It was not long after that that he famously amputated his own finger tips to remove the necrotic area after his doctor urged him to wait until they were more fully healed. It is likely that that incident had an impact on him contracting frostbite once again.

The rest of the team is still proceeding ahead with their plans. They will depart on the Antarctic crossing on March 21 with several members of the team on skis, while others drive support vehicles behind them. We’ll be able to follow their progress at the Coldest Journey website.

The BBC article linked to above indicates that Fiennes is absolutely devastated that he won’t be able to join the team on this trek. Some believe that he saw this as a possible swan song to his career, capping an already impressive resume with one last grand adventure. Unfortunately that isn’t going to happen. As soon as the weather clears, he will be on a plane back to South Africa.