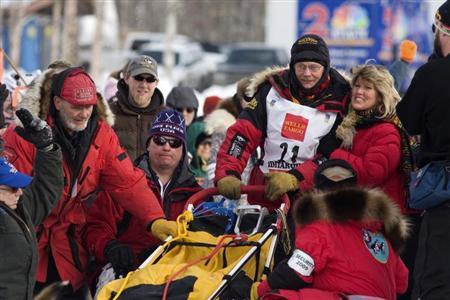 The winner of the 2013 Iditarod sled dog race was crowned over night with Mitch Seavey earning the honor of being first into Nome. Seavey crossed the finish line at 10:39 PM local time last evening, finishing the race with a total time of 9 days, 7 hours and 39 minutes. This is his second Iditarod win. He previously won the race back in 2004.

Aliy Zirkle arrived just 22 minutes behind Mitch and Jeff King claimed third, an hour and 48 minutes back. That isn’t a lot of time separating the top three competitors considering a race of this length. Seavey’s son Dallas was fourth into Nome while Ray Redington Jr. rounds out the top five.

As of this writing, there are eight mushers into Nome in what has to be one of the closest and most competitive races in recent memory. Often times the winner reaches the finish line with maybe one other musher in close pursuit, while a large gap separates them from the pack. Other teams are out on the course and we should see quite a few of them reach the finish line today.

With this win, 53-year old Mitch is now the oldest person to claim victory in the Iditarod, while his son Dallas holds the record for the youngest to accomplish that feat. Dallas was just 25 when he won the race last year. I guess family gatherings at the Seavey household are a competitive affair.

Congratulations to Mitch Seavey on an impressive win. This has been another fun Iditarod to follow. It isn’t over just yet as there are still plenty of teams out on the course. A good number of them will complete the 1000-mile race today but for those at the back of the pack, it’ll be a couple of days before they find their way into Nome.