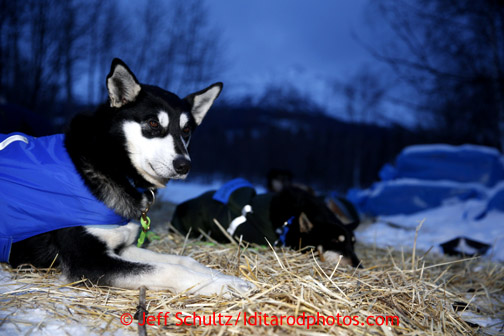 The 2013 Iditarod sled dog race is moving along at a near-record pace following a full rest day for nearly the entire field. Over the past 24 hours we’ve seen a lot of the teams jockey for position and now we’re starting to see the contenders show their cards as they move into the Yukon. The frontrunners are now more than halfway to Nome and while there is plenty of racing yet to come, the miles are dropping off very quickly.

The only musher who has reached the Grayling checkpoint thus far is Aliy Zirkle who is looking to become the first woman to win the Iditarod in 23 years. She’s been moving fast today but seems to have great command of her team at the 530-mile mark. Chasing her in second place is Aaron Burmeister, who has hovered around the top of leaderboard regularly this year. Jake Berkowitz is currently holding down fourth place, with Martin Buser and Nicolas Petit rounding out the top five.

Buser was in command earlier today, arriving in Anvik ahead of anyone else. That earned him the “First to the Yukon” award that is given out each year by the Millennium Alaskan Hotel. The Millennium sends their top chef Bobby Sidro out to the trail to greet the first musher in and then cook him or her a gourmet meal. This year Buser was treated to Red King crab stuffed Portobello mushrooms and smoked sockeye salmon cucumbers with gourmet cheeses, Alaskan Clam Chowder, Roast duck salad with mixed greens, 14 oz. ribeye steak topped with a Cognac and Alaskan Amber sauce accompanied by jumbo prawns and bacon wrapped sea scallops served with grilled asparagus and four cheese risotto cakes. Each course is accompanied by four wine pairings and dessert was an assortment of fresh fruit tarts.

After eating all of that, its no wonder that Buser elected to take his mandatory eight our rest right there in Anvik, which allowed the three teams in front of him to gain a lead. But with that rest period out of the way, Buser is now free to race all the way to Nome and I suspect we’ll see him back at the top of the leaderboard sometime tomorrow. His strategy has been paying off so far and his dogs are running well. It’s just a matter of whether or not they can maintain the pace on the final 450 miles to the finish line.