Despite the major drama that went down in Camp 2 and 3 on Everest over the weekend, most of the teams continued their all important acclimatization rotations. While news travels fast on the world’s tallest mountain, and I’m sure most of the climbers heard about the incident that took place between the Sherpas and Simone Moro and Ueli Steck, they all had work to do and had little time to dwell on the situation. May is rapidly approaching now, which means summit day is closer than they think and there is still plenty of preparation that needs to be completed before anyone makes a move toward the top.

Of course, no one gains access to the summit without the Sherpa teams fixing ropes first. As we know by now, those lines have been set all the way up the Lhotse Face to Camp 3, and while no work was done on Saturday, the Sherpa teams were back at it yesterday. The initial plan was to reach the summit sometime in the first week of May, but now the team charged with setting down the rope is short a few key members. Whether or not that will slow down the process remains to be seen, but I suspect the lines will be in place on schedule.

While the teams wait for news on the ropes situation, they are continuing to march up and down the mountain, allowing their bodies to acclimatize nicely. IMG has been systematically rotating their three teams between Base Camp, C1 and C2 as they put in the hard work that will pay off in a few weeks time. Similarly the RMI squad spent most of the weekend in Camp 2 and hiked up to the start of the Lhotse Face as they concentrate on their own efforts. The Peak Freaks are in the midst of their latest rotation as well and indicate that they plan to spend the night in Camp 3 tomorrow. That will be a major milestone for that team, which will return to BC for a rest afterward.

David Tait has shared a bit of a harrowing update, writing about his experiences of getting caught in a minor avalanche on Everest. As always, it is quite a good read – that is if you can find it on David’s website, which inexplicably mixes blog reports, video dispatches and tweets in a moving mess that is more confusing than helpful.

Climber/journalist Bili Bierling has returned to Everest Base Camp now that her bout with altitude sickness is fully behind her. She waits patiently for her attempt on Nuptse, which won’t really be able to get underway until after the ropes are fixed up Everest and Lhotse. She’s keeping herself busy writing reports on the progress of the Himex team and doing research for the legendary Miss Elizabeth Hawley. 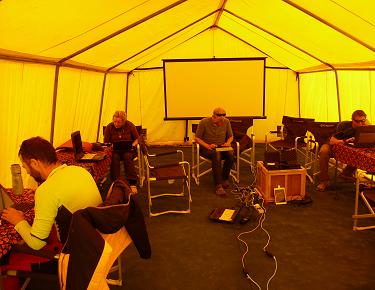 On the North Side, the Altitude Junkies spent some time at Advanced Base Camp over the weekend as their acclimatization efforts continued far from the drama that unfolded on the South Side of the mountain. High winds pushed the team back down to BC today however, where they are now enjoying the relative comforts that come along with being back at the base of Everest. The ropes are fixed all the way up to Camp 3 and Sherpas are now shuttling gear to that point in preparation of the team reaching there in the next week or so.

The 7 Summits club started their first rotation over the weekend as well after having their Puja late in the week. They were all moving up toward ABC over the weekend and there has been no update on their progress since. It is likely that they are still there or may be descending today.

Weather reports say the next few days should be good on both sides of the mountain, although a shift in the jet stream may bring higher winds on the upper slopes. For now though, it is all about climbing high and sleeping low as they teams continue their prep work. This will be the pattern for the next few weeks while we wait for the ropes to be put into place and the eventual weather windows to open.

1 thought on “Everest 2013: The Grind Continues As Teams Prep For Summit Bids”