Yesterday I reported that a collapse in the Khumbu Icefall on Everest’s South Side was causing some delays on that side of the mountain, but that I expected the Icefall Doctors to have the route repaired and ready to go. Turns out most of the teams elected to delay their first rotation by a day and let the Docs do their work. That means most should be heading up to Camp 1 today as they begin their prep work for the tough climb to come.

One of the teams that was suppose to have gone up to C1 two days ago was the Peak Freaks. They missed that window of opportunity and ended up delaying yesterday too. That means they should be heading up today and sticking to their original plan of spending the night at Camp 1 before proceeding up to C2 tomorrow. They’ll only tag that point on the mountain however, as they’ll then descend back to C1 for another nights stay. On Saturday they should then head back up to Camp 2 for two nights, before returning all the way back to Base Camp at the start of next week.

The RMI squad was all set to make their first foray up to Camp 1 yesterday too, but thanks to the icefall collapse, it turned out to be just a drill to show them how long it takes to get prepared in the morning. The day wasn’t a total waste however as they used the time to trek on the glacier and use their sat phones to connect with friends and family back home.

The latest dispatch from IMG indicates that their Camps 1 and 2 are now fully built and stocked with supplies. That means they are ready to be occupied by the climbers, who will head up as soon as the new route through the icefall is established. They also report that the next meeting of the team leaders is scheduled to take place today, which means that they will most likely work out the details of the logistics of getting the ropes fixed above C2. Over the past few years, this has become a cooperative effort, with each team contributing man-power and ropes to the job. Typically the rope fixing is done by the early part of May, clearing the way for the first climbers to head up around the middle of the month, weather permitting of course.

Simone Moro has shared news of his progress along with Ueli Steck. These two men aren’t concerned with the icefall route at all, because they have already passed through it and have been spending their time at Camp 2. As of Tuesday, they had already made their second ascent to that point on the mountain, and as you would expect, they are feeling strong and ready to go. No word yet on just what route they will be taking to the top, but there is some indication that they may have left for the West Ridge yesterday. 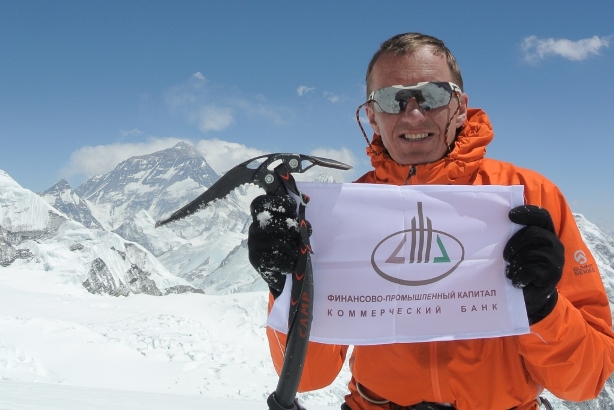 Denis Urubko and Alexei Bolotov are back in BC after having already gone as high as Camp 3 and spent a night at 7000 meters (22,965 ft). They are also working a new route this spring along the Southwest Ridge and so far they seem to be pleased with their progress.
David Tait has shared another one of his well written updates from his expedition. He, along with his Himex teammates, held their Puja ceremony a few days back, then immediately left for Lobuche Peak for an acclimatization round. Despite an uncomfortable and long night in the tent, David had no problems with that climb and actually returned to Everest Base Camp ahead of schedule. He indicates that he wants to be amongst the first climbers to the summit once again this year and hopes to go up at the same time as the Sherpas fixing the final lines to the top. Considering his past track record and history, I’d say it is a safe bet that he’ll get his chance to do just that.

Melissa Arnot is sharing her experiences from Base Camp as well, a place that she finds surprisingly comfortable in this modern age. After spending some time trekking in with friends, all of whom have gone home now, she’s ready to start climbing. If the route through the icefall is repaired, she’ll move up to Camp 1 today as well.

On the North Side of the mountain, the Altitude Junkies report that everything is proceeding as expected thus far. They’ve sent as many as 60 yaks up to Interim BC and ABC carrying supplies to get those camps ready for their arrivial. They currently plan to spend a few more days in Base Camp before heading up on Sunday. They hope to arrive in ABC on Monday and spend at least one night their.

Reportedly all ten teams climbing from the North Side are now in BC with a total of about 100 climbers. That includes the 7 Summits Club, who sent two separate teams there within the past few days. Those relatively low numbers should mean that there will be no traffic jams on that side of the mountain, with relatively clear sailing all the way to the top.

Lots of news flowing in now, which is a far cry from even just a few years ago. Communications on these expeditions is so much improved over the past. Everyone should be on the move by this weekend with lots of climbers moving up on both sides of the mountain.