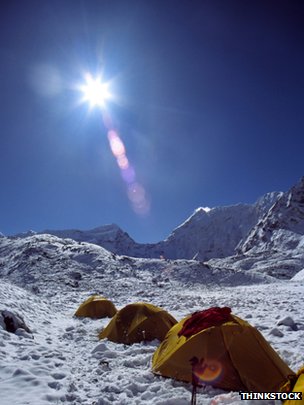 The 2013 Himalayan climbing season may be over but Everest continues to make headlines. After another very busy season that included a probable record number of summits and nine fatalities, members of the mainstream press are once again scrutinizing the climbing scene on the Big Hill with over crowding being one of the top issues. Over the weekend I came across two different articles that examine the growing crowds on Everest and come up with yet more suggestions on how control them.

The first story comes our way courtesy of the Toronto Star which examines the issue of overcrowding closely and explains the situation in a way that is about as fair and accurate as I’ve seen from a mainstream outlet. But the story goes on to say that much of the blame for the large crowds on Everest is being placed –both fairly and unfairly – on the Sherpas. The local Nepali guides are called on the carpet for now being more proactive in turning down climbers who shouldn’t be on the mountain or for taking clients on simply because they can afford to pay. The article notes that Nepal made more than $3 million in climbing permits alone this year and that doesn’t take into account the amount of money that visitors pump into the local economy in other ways.

The story does acknowledge that without the efforts of the Sherpas, almost no one would be able to climb Everest. Their hard work paves the way for everyone to follow and yet they are often underpaid, get few benefits and are forced to do the most dangerous work on the mountain. While those of us who regularly follow the news that comes out of the mountaineering community already know this, I do think it is important for the casual reader of these articles to understand the importance that these men and women play in helping so many western climbers get to the summit.

The second article comes from the always excellent BBC and takes a look at the efforts by Nepal to “decentralize” climbing there by encouraging mountaineers to attempt other peaks rather than just Everest. So far, those efforts haven’t gone as well as Nepal’s government would like, as the article states that a third of the mountains that are open to climbing in the country never see visitors at all. There are 330 peaks designated as being open, which is just a fraction of the 1310 total mountains that have been identified as being appropriate for climbing within Nepal.

A big reason why many of these mountains remain untouched is that there is no infrastructure for supporting a team of climbers in certain parts of the country. Without that infrastructure an expedition to one of these peaks is a difficult and costly affair. The government has supported such efforts in the Khumbu region near Everest and around Annapurna, but the infrastructure for climbing in the western part of the country is all but non-existant.

The implication of this story is that overcrowding on Everest could be alleviated if more people set their sights on other mountains in the Himalaya. I think that is a false assumption however as the vast majority of those other peaks mean nothing to anyone who is outside the dedicated mountaineering community. Most of the people who come to Nepal to climb want to take on Everest because it is the tallest mountain on the planet and it is a name that everyone recognizes. Baggins a sub-8000 meter peak that no one has ever heard of doesn’t look quite as good on the climbing resume.

Personally, I think that if Nepal wants to ease crowding they need to cut back on the number of permits issued. Of course, that means fewer dollars in their coffers, so they aren’t likely to do that. However, if they added the stipulation that anyone climbing Everest must first climb another Himalayan peak to prove their skills, it not only could help lower the crowds but also get some mountaineers to attempt peaks in other parts of the country too. That might actually help offset some of the loss of revenue they could potentially see by limiting permits on Everest itself.

I don’t get the sense that lessening the crowds on the world’s tallest mountain is much of a priority. We continue to set new records of the number of climbers that visit Everest each year and the government of Nepal doesn’t seem all that interested in changing that. If they really wanted to change things they could easily do so. For now though, I expect things to continue to get worse before they get better.