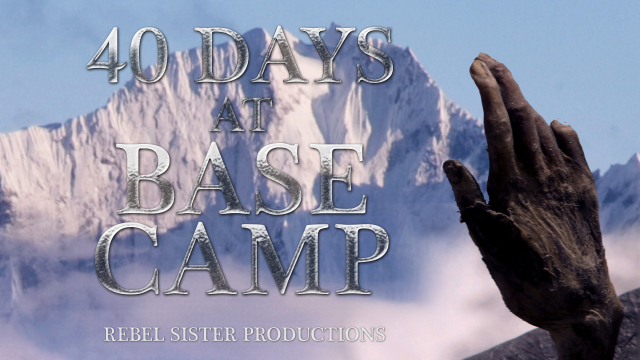 Way back in October of 2011 I told you about a new documentary that was in the works entitled 40 Days At Base Camp. As the name implies, the film chronicles a full season on Everest, examining what life is like in BC on the tallest mountain on the planet. The film was shot during the 2011 climbing season and has been available on DVD for some time.

Is also now available in digital format on the iTunes store for a very reasonable $7.99 for standard definition and $9.99 in high-def. It can also be rented for $3.99 and $4.99 in those same resolutions.

I watched the 54-minute documentary last night and thought that was quite good. Director Dianne Whelan has managed to pack a lot of content into a compact space, telling the story of climbers looking to summit the mountain while also managing to touch on such subjects as climbing culture, climate change and overcrowding on the mountain.

Those topics are handled deftly and honestly without getting heavy handed. It’s clear that the filmmaker knows and understands her subject matter and presents it well to an audience that may know nothing about climbing Everest or may be intimately knowledgeable on the subject.

That said, there were a few times where I felt the narration got a little overly dramatic. It didn’t happen often and it wasn’t consistently so, but it did happen from time to time. Perhaps this was a personal feeling, coming from someone who has been to BC and knows the Everest climbing routine fairly well.  The mainstream crowd probably wouldn’t even notice and the added dramatic effect may help hammer home a point. For the most part, the narration was spot on however and told the tale of a single climbing season quite well.

As with most films of this type, much of the joy in watching it can be found in the gorgeous shots of Everest in the Himalaya. Whelan managed to catch some beautiful imagery from Nepal and as a result, this documentary is a bit like mountain-porn for those of us who can’t get enough of that sort of thing. There were even some early moments that showed the trek into BC where I recognized where they were at on the trail and I got a little wistful missing that hike.

If you’re the kind of person who can’t get enough of Everest, then you’ll certainly want to catch 40 Days At Base Camp. It does an excellent job of giving us a glimpse into what life is like in BC during a typical climbing season. While it doesn’t break a lot of new ground, it is one of the better documentaries on climbing Everest to come out in a long time.

If you’re new to the Everest climbing scene, then this film is a nice intro to life on the mountain. You’ll learn a lot about what it takes to summit the world’s tallest peak and you’ll come away with a better understanding of the issues that it faces in the 21st century. Be warned though, the film will leave you wanting more and a quick glance at the calendar tells me we’re a long way off from the next climbing season.

Rent or buy on iTunes now. Watch the trailer below.

40 Days At Base Camp- Trailer from Andrew Coppin on Vimeo.