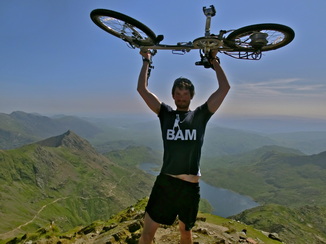 British adventurer Leon McCarron has just completed a very cool expedition. Leon, who has walked 3000 miles (4828 km) from Mongolia to Hong Kong and trekked through the Empty Quarter from Oman to the UAE, as now completed a climb of the “Six Peaks,” which consists of the tallest mountain in each of the major regions of the British Isles. And in doing so, he also rode a folding bike between each of his destinations, covering 750 miles (1207 km) in the process.

Leon shares some of the details of his expedition in a recent blog post on his site, although he promises more updates in the days ahead. The entire journey took 19 days to complete and like any good adventure it didn’t always go as planned. Still, it seems like he managed to improvise quite nicely and ended up having a fun and incredibly satisfying adventure during which he rode his bike between the mountains and carried it on his back when he trekked to the summits.

Aside from the peak bagging, Leon also says that he had a fantastic time riding his bike between each of the mountains. The landscapes that he passed through were scenic and made for some of the best cycling he’s ever encountered. The fantastic summer that the U.K. is experiencing didn’t hurt the situation either.

Reading the text of his blog post, it is clear that this was an enjoyable experience all around and it is another example of finding adventure in your own backyard. He didn’t have to travel off to some far flung locale for this expedition and yet it was still very satisfying. Well done Leon!