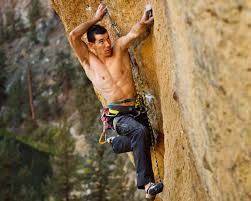 Alex Honnold just might be the best rock climber in the world. Over the past few years he has earned himself a reputation for free climbing some incredibly tough routes and doing so in record time. Now, National Geographic has announced that Alex will turn his considerable skills on a new challenge later this fall when he will attempt to free solo a building on live television.

For safety reasons, exactly which building Honnold will be climbing remains a mystery at this time. But what we do know is that the climb will air live on the Nat Geo Channel later this year. Much of the camera work for that event will be handled by Sender Films, who have worked closely with Alex on several climbing films in the past.

The announcement of the event that I linked to above comes with a brief interview with Honnold, who says that he is very much looking forward to the challenge. He says he hasn’t climbed a building since he was a kid but feels that it is very much like climbing a rock face in Yosemite with the same movements involved. When asked if he thought doing the climb on live television would change anything for him, Alex said that it wouldn’t. He’d simply be focused in as on any other climb, without even really noticing that it was being broadcasted for the world to see.

Personally, I’m not sure what to make of this event. On the one hand, it is an opportunity for a non-climbing audience to see what Alex can do, but then again I feel that would be better served with a straight climbing film on his achievements. Climbing a building feels like a bit of a gimmick to me and watching the entire thing live lends it a voyeuristic quality that seems a bit unsettling as well. There will obviously be a lot of people tuning in just to see if he will fall and that seems just wrong. I’ll wait to learn more about the details of the event before I pass too much judgement, but so far I don’t think this is something I’d go out of my way to tune into.