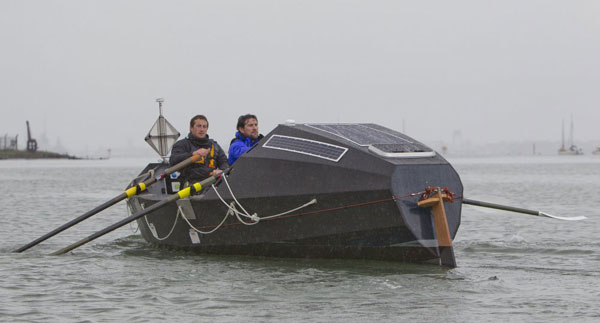 I’m still catching up on all of the news that went down in the world of adventure while I was off chasing dingos and wrestling crocodiles. (Okay, maybe I made that up!) One of the events that wrapped up while the blog was on hiatus was the amazing GB Row Challenge, which pits rowing teams against one another on a race around Great Britain. Thats a 2000-mile (3218 km) journey through some of the toughest, most demanding waters imaginable, making it one of the most challenging rowing events on the planet.

Back in early June, when the race actually began, there were six teams who set out to compete in the GB Row. Within a few days the field was whittled down to just two however with the four-man team of the Islanders and the two-man team of Savoir Faire soldiering on in some very difficult conditions. But both teams were able to complete the race and set individual records for their classifications in the process.

The Islanders managed to finish the entire row in an impressive 26 days, 9 hours and 9 minutes, which breaks the previous fastest time by 12 hours and and earned them a bonus of £100,000 (roughly $152,000). Not a bad payday although they certainly worked hard to get it. Team Savoir Faire, which is made up of rowers Jason McKinlay and Josh Tarr, also set a record for the two-man category, crossing the finish line in 41 days, 4 hours, 38 minutes. While that won’t earn them a massive bonus like their compatriots, it has certainly won them a great deal of respect and admiration from the rowing community, especially when you consider that they spent a couple of days pinned down by the notoriously bad weather that is common in the British Isles this time of year.

Congratulations to both teams for not only completing the race but for setting new records in the process. Excellent work in a race that doesn’t receive a lot of attention but is about as demanding as anything an athlete can undertake. Well done!

Thanks to Sylvia for sharing the update on the race and for cheering her friends Jason and Josh on all the way to the end! Check out their finish at London’s Tower Bridge in the video below.