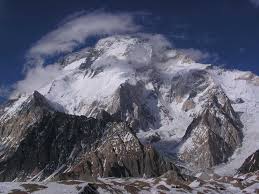 It was another very busy weekend in the mountains of Pakistan, where teams were on the move once again. The season is starting to wind down at last and some of the climbers were able to take advantage of a weather window to complete their summit bids. Meanwhile, on Broad Peak hope begins to fade as rescue operations continue for the Iranian team that has been stranded at altitude for nearly a week.

We’ll start with the news from BP where search and rescue teams continue to look for the three missing Iranian climbers who topped out along a new route last week but ran into trouble on their descent. The three men, Aidin Bozorgi, Pouya Keivan and Mojtaba Jarahi, first spent three days above Camp 3 just trying to reach the summit and have now reportedly been stuck above 7800 meters (25,590 ft) since last Tuesday when they tried to descend along the normal route. Their teammates have gone up the mountain to try to deliver food and water before attempting to help the climbers down, but so far they have been unable to locate their missing friends.

News of the predicament has spread to other teams in the Karakoram and climbers have come from K2 and other mountains to try to lend a hand. Reportedly helicopters have also been dispatched to help in the search efforts too, but so far there has been no luck in locating the men. The situation is now quite desperate as they were already low on food and water when they called for help late last week. By now they are probably out of food and no longer have fuel to melt snow for water. They are also probably far too weak at this point to continue down themselves. Lets continue to keep these three men – as well as their friends and families – in our thoughts. Hopefully it is not too late to find them and safely get them off the mountain.

Elsewhere there were successful summit bids on several mountains. On Nanga Parbat, the sight of eleven brutal killings earlier in the season, the lone remaining team managed to top out. The Romanian squad, climbing along the Rupal face, put four climbers on the summit on Friday, bringing an end to a tough expedition which was made all the more difficult by lingering fears that another terrorist attack might occur. The team should now be back in Base Camp and preparing to depart for home today.

Meanwhile, over on the Gasherbrums teams have launched summit bids as well. Chris Jensen Burke and her team have left for the summit of GII on Saturday and if successful, they’ll return to BC and then make an attempt on GI as well. Carlos Carranzo is attempt GII as well although his latest dispatch says that conditions have taken a turn for the worse there, so we’ll have to wait and see how things play out. It may be that teams are already in retreat on that mountain. The Spanish team climbing there found success yesterday however, putting some of the climbers on top of Gasherbrum I, while others rethink their strategy and consider GII instead.

Finally, the schedule on K2 is finally starting to fall into place. It looks like a weather window is set to open on July 27 that will grant access to the summit for several days. In order to take advantage of this stable pattern, teams are now planning to set out from Base Camp on Wednesday of this week so that they can take advantage of this first, and possibly only, weather window of the season. K2 is notoriously tough to climb and the alpinists want to be in a good position to take advantage of any opportunity that they might get. More on that as they launch their summit bids in a few days.

Thins are pretty active in Pakistan at the moment. More news in the days ahead and keep your fingers crossed for the missing Iranians.