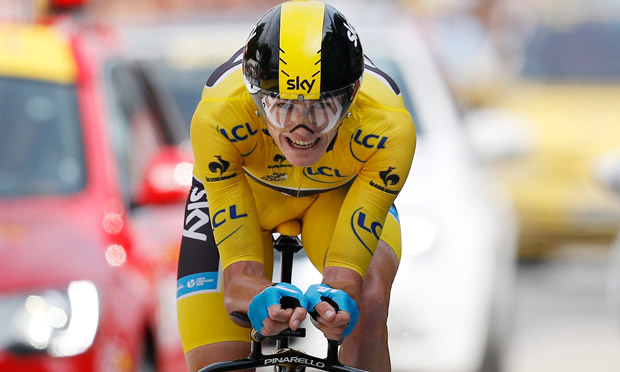 Heading into today’s individual time trial at the Tour de France I predicted that Chris Froome would win the stage thanks to his impressive climbing abilities that have been unmatched so far this year. Turns out that prediction proved accurate as the man in Yellow continued to dominate the race and gained yet more time over his rivals, although a familiar name now sits in second place heading into tomorrow’s crucial stage.

Today’s stage was just 32 km (19.88 miles) in length, which is plenty for an individual time trial. The course designers through in a couple of Category 2 climbs to make things interesting as well, which surely sapped the legs of some of those looking to gain time. That could be costly over the next few days, when some big climbs will ultimately determine the standings heading into Paris, but unless something dramatic happens, we already know who our winner is. Froome completed today’s stage in 51 minutes, 33 seconds, which was 9 seconds faster than Alberto Contador who managed to move up to second place in the General Classification. That would normally seem like a good place to be moving into the final mountain stages, but considering the fact that he is 4 minutes, 34 seconds behind Froome, it seems unlikely that he’ll be able to close the gap. Roman Kreuziger, Contador’s teammate on Team Saxo-Tinkoff is now in third place an additional 17 seconds off the pace.

Since there were no sprint points up for grabs today, Peter Sagan remains in the Green Jersey and Froome holds onto the Polka Dot, which is worn on the course by Mikel Nieve of Euskaltel-Euskadi, who is actually in third place in the King of the Mountains competition. In second is Nairo Quintana Rojas of Movistar, but he doesn’t wear the Polka Dots because he is also in the White Jersey as the our’s best rider under the age of 25.

Tomorrow promises to be one of the most epic days in the history of the Tour and is certainly the one that fans of the race have been anticipating since the course was announced a few months back. It isa 168 km (104.38 mile) stage that begins in Gap and ends on the fabled summit of Alpe d’Huez, a mountain that has had a major impact on the TdF over the years. But this year the riders won’t be clawing their way to the top just once, they’ll have to go up the mountain twice, which is sure to shred the peloton and create massive time gaps once again. If Contador looks to make up time, he’ll need to make a move tomorrow, but considering how well Froome is climbing, it’ll be a tough go. Alpe d’Huez is a beyond category climb of course, but the riders will also face a Cat 3 and three Category 2 climbs along the way as well. There will be a few sprint points to grab as well, but really this is all about the climbers. It should be thrilling and agonizing to watch.

If there is going to be any drama in the final few days of the race, it’ll come tomorrow. If Froome cracks (doesn’t seem likely!), then Contador has the chance to gain substantial time and take the lead. There just hasn’t been any indication that anyone will be able to challenge the Kenyan-born British cyclist thus far and I don’t expect that the change to tomorrow either. But this is professional cycling and anything can happen.