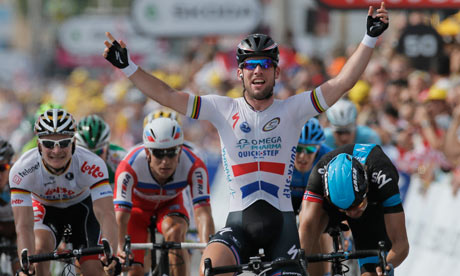 With yesterday’s Team Time Trial now behind them the riders in the Tour de France returned to the roads today for a 219 km (136.06 mile) stage that ran from Cagnes-sur-Mer to Marseille. The route wound its way through the scenic French countryside and featured a single Category 3 climb and three Category 4 climbs as well. That gave the riders in the hunt for the King of the Mountain jersey a chance to earn some points, while an intermediate sprint put the Green Jersey contenders on the attack. Meanwhile, the main peloton was content to just ride through the hills at a steady pace with no one really threatening the Yellow Jersey at all.

Once again today an early breakaway made things a bit interesting with a group of riders working together to try to survive to the end of the stage. The peloton didn’t panic however and the last of the stragglers were gathered up just a few miles from the finish line. That allowed the sprinters to jockey for position and the fastest riders in the world moved into place to go head-to-head for the stage win. Several of the big names were there at the end including Cannondale’s Peter Sagan, André Greipel of Lotto-Belisol and Edvald Boasson Hagen from Team Sky. But in the end no one could catch Mark Cavendish who earned the 24th stage win of his career.

For the most part, there wasn’t a lot of drama in today’s race. None of the big names are ready to put in an attack so early on and if they did, it isn’t likely that they would succeed anyway. These stages are on the course to let riders with other skills show off their talents while the GC contenders bide their time for the mountain stages to come. There were a couple of major crashes near the end that left a couple of dozen riders sprawled out on the ground. The last of those crashes occurred just before the finish line and appeared more serious than the first. I haven’t seen any reports of injuries, but I wouldn’t be surprised if a rider or two didn’t get hurt in the fall. There were several riders who were sitting prone for a considerable amount of time after the accident.

With the action confined to the closing minutes of the stage there was no change in the standings today nor was there any impact on the various Jerseys. Simon Gerrans of Orica Greenedge remains in the Yellow Jersey and will probably be able to defend for a couple of more days. Sagan held on to the Green Jersey while Pierre Rolland kept the Polk Dots that go to the top climber. Belgian rider Michal Kwiatkowski keeps the White Jersey as the best young rider on the tour this year as well.

Barring any unforeseen accidents the standings will remain rather static tomorrow as well. The ride covers 176 km (109.35 miles) and begins with a bit of a downhill run that leads to an intermediate sprint point followed by a single Category 4 climb. After that, it’s almost completely flat all the way to the finish. The riders will start the day in Aix-en-Provence and end in Montpellier in what promises to be another showdown for the sprinters. Can Cavendish pull out back-to-back wins? We’ll just have to wait and see.

The first big test looms on Friday with two major climbs in the Pyrenees. That stage will feature both a Beyond Category climb and a mountaintop finish on a Category 1 climb. Following that test, we’ll truly know who are the real contenders this year.