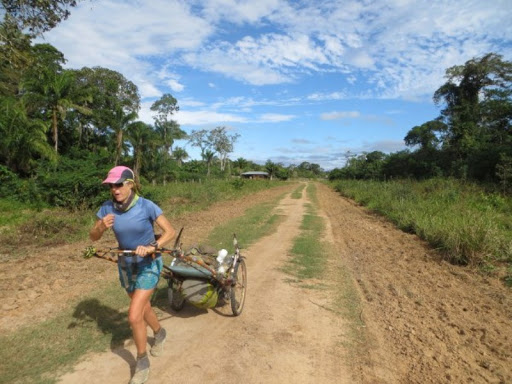 On July 28, David and Katharine Lowrie set out on a run like no other. The pair have hit the road to run the length of South America. Yes, you read that right. They are planning on running south to north across the entire continent and they’re doing so to raise awareness and funds to protect the wildlife that lives in threatened areas there. Their expedition is aptly named the 5000 Mile Project, as that is the distance that they will cover before they are through. (That’s roughly 8046 km for most of the world.)

The began their epic adventure last month by setting off from Punta Arenas, Chile, the southernmost settlement in South America. They’ll now work their way north through Patagonia, crossing between Chile and Argentina as they go. Eventually they’ll cross into Bolivia before continuing on to Brazil, where they’ll face one of the biggest challenges to the expedition – a crossing of the Amazon Rainforest. If successful there, they’ll emerge into Venezuela and finish the journey with a run to the Caribbean coast.

The Lowrie’s hope to wrap up their journey approximately a year after they started. That seems rather ambitious considering the difficult miles that lie ahead. The couple aren’t just out on the road running unencumbered. They’re pulling specially designed carts behind them that carry all of their gear and supplies as well. David and Katharine are hoping to cover roughly the length of a marathon each day (26.2 miles/42.1 km), which is a challenge but highly feasible while on roads. But once they hit the Amazon, things will be completely different and much more difficult in general.

The husband and wife team have undertaken the 5000 Mile Project to raise funds for Asociacion Armonia, BirdLife International and Conservacion Patagonica. The hope is to collect enough money to help fund the purchase of threatened habitats in South America to protect the wildlife that lives there. As part of the project, they are also recording the various animals they see along their run including the many bird species that inhabit the continent.

Their efforts don’t end there however. They’ve also launched the BigToe Classroom which contains lesson plans and projects for teachers to use with their students to get them engaged with conservation projects as well. There is even a way to contact David and Katharine and set up a video conference call with them directly from the road.

You can learn more about the 5000 Mile Project in an interview that the couple did with Explorers Web earlier in the week. You can also follow along with David and Katharine’s blog or on Twitter and Facebook.