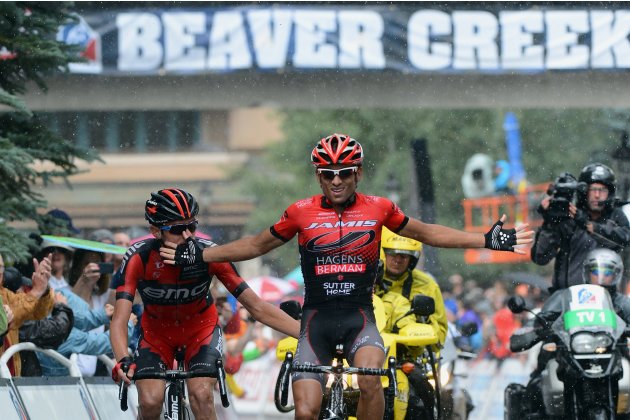 As I mentioned a few days ago, the USA Pro Cycling Challenge is underway in Colorado where some of the best bike riders in the world are squaring off on a course that offers plenty of climbing at altitude. It has been a solid week of riding already, but yesterday’s stage was one that put the real contenders out front and ready to duel for the win.

Heading into the weekend there is a familiar name at the top of the leaderboard as American Tejay van Garderen holds a 4 second lead over his teammate on Team BMC Mathias Frank. In third place sits Janier Alexis Acevedo Calle, 30 seconds of the pace, while Tom Danielson and Lachlan Morton, both of Garmin-Sharp are further back in 4th and 5th place respectively.

Tejay has been riding well this week and he looked very strong and confidant on yesterday’s leg during which he took over the Yellow Jersey. It’ll be tough to beat him as the riders turn towards Denver, which will host the final leg of the race on Sunday. That one is designed for the sprinters to take center stage, which means if anyone is going to crack van Garderen, they had better do it today or tomorrow.

Today’s stage is a short one. It a 16 km (10 mile) time trial that is tougher than it sounds. The first half of the ride will be fairly flat and fast, while the second half is all uphill. In fact, it climbs about 516 meters (1694 ft) in the last 8 km (5 miles). Considering the fact that Tejay is viewed as the best time trialist amongst the top contenders and he’s a strong climber, he shouldn’t give up much ground today.

That leaves Saturdays 185 km (115 mile) stage 6 between Loveland and Fort Collins as the place for someone to make a move. It features plenty of climbing (more than 3657 meters/12,000 ft) but potential headwinds could make the riders feel the pain even more than those numbers indicate. It also happens to be a down-hill finish, which would allow any potential contenders to be easily swept up. In short, it’s tough to see anyone catching van Garderen as this point, but it isn’t over until it’s over.

In the race for the other jerseys, Cannonadale’s Peter Sagan is the current leader in the Sprint category while Matt Cooke is the King of the Mountain and Morton is the Best Young Rider. Whether or not any of them will be able to hold on to those honors will also be learned this weekend.

It has been another exciting race this far. Great to know that the event continues to get great crowds lining the roads and plenty of fans following along at home. Lets hope this race stays healthy for years to come.