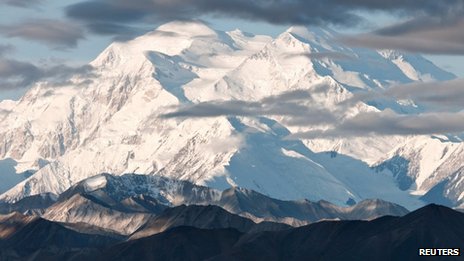 The tallest mountain in North America isn’t quite as tall as previously thought. The U.S. Geological Survey recently resurveyed Denali – aka Mt. McKinley – and discovered that it is actually 83 feet shorter than when it was last officially measured in 1952. That means that it now stands at 20,237 ft (6168 meters) in height, down from 20,320 ft (6193 meters).

The surveyors used high tech Interferometric Synthetic Aperture Radar to make precise measurements of Denali and numerous other Alaskan peaks. The survey was done last year but is only just now being released on new topographic maps.

It isn’t exactly clear why there is such a discrepancy between previous surveys and this most recent one. The team who completed the 2012 measurements speculate that it may be due to improved technology or a result of climate change taking some of the snow and ice from the summit. It is most likely a combination of both of those reasons however and while it is not uncommon for the official height of a mountain to change, it is rare for it to be off by such a substantial amount

For the mountaineering community the new height doesn’t really make that much difference. While it does shave 83 feet (25.3 meters) from the actual height of the climb, Denali remains one of the toughest mountains around. Its notoriously fickle weather adds a level of challenge that isn’t found on many other peaks of comparable height while its latitude, combined with total altitude gain, make it feel like a peak that rises much higher than its official height would seem to indicate. It is because of those factors that Denali is often used as a training ground for Everest.

The change in height has no effect on Denali’s status as the tallest mountain in North America.

1 thought on “Denali Is 83 Feet Shorter Than Previously Thought”