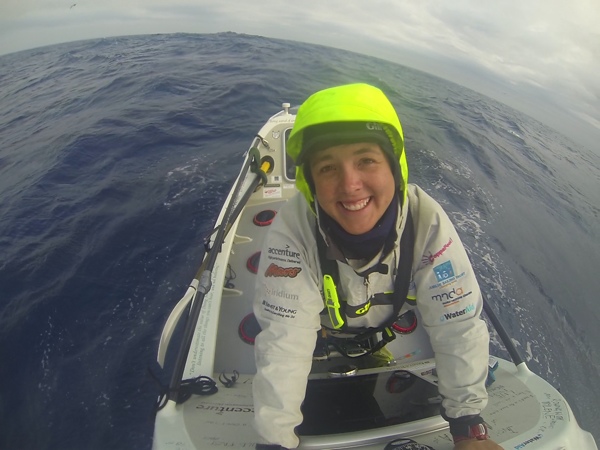 Sarah Outen’s bid to complete an entirely human powered circumnavigation of the planet will reach another milestone today when she makes landfall in Alaska. For the past several days she has been rowing towards the Aleutian Islands where she will wrap up the current stage of her London2London expedition during which she has been paddling, rowing and cycling around the world.

As you may recall, Sarah has been rowing across the Northern Pacific for the past several months having set out from Japan this past spring. A few weeks back the decision was made to turn towards the Aleutians rather than to risk traveling all the way to Canada as originally planned. Bad weather, slower than expected progress and the onset of fall have all played a part in this decision and if all goes according to plan, she should reach remote Adak island sometime later today. A support team and a guide boat are already on hand to greet her and help her reach land safely.

This row across the Pacific is just the latest stage of the London2London adventure. Sarah first set out from London back on April 1, 2011 by first paddling her kayak under the Tower Bridge on the Thames River. From there she crossed the English Channel, made landfall in France and began riding her bike across Europe and Asia. In the spring of last year she set out in a rowboat from Chosi, Japan with the hopes of eventually reaching Canada. A few weeks into that stage of the journey a tropical storm hit hard, forcing Outen to abandon that attempt. This spring she returned to Japan with a new rowboat and started the crossing once again.

Once she reaches the Aleutian Islands, Sarah will take another break from her travels and wait for the calmer weather of spring to arrive. She’ll then island hop in a kayak all the way to the Alaskan mainland where she’ll get back on her bike and begin ridding across the U.S. and Canada. Eventually she’ll return to the water however and attempt to row across the Northern Atlantic as she eventually returns to where she started back in London.

As of this writing, Sarah is still a few hours from reaching land. Everything is going according to plan however and while the weather is less than ideal, there is no reason to believe that she won’t soon be safe and sound with her support team. After 150 days at sea, I’m sure she’s more than ready to get off the water for awhile.