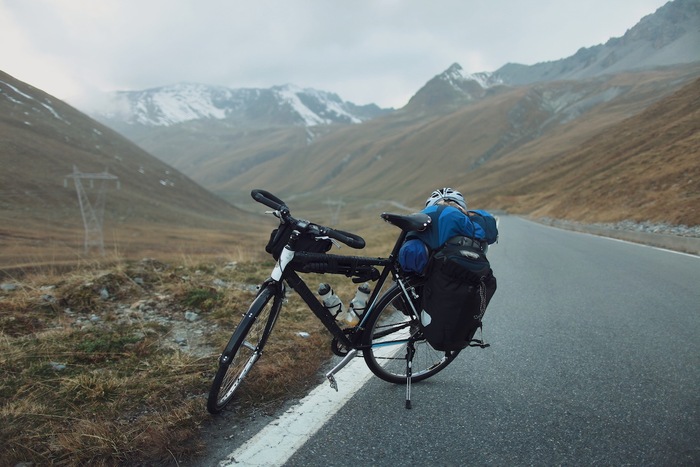 Two different long-distance cyclists are seeking modest funding through crowd sourcing to help get their expeditions to the finish line.Both of them are trying to complete very different projects in very similar ways as they attempt to cover the final legs of their individual journeys that have taken them to the far reaches of the globe.

First up, we have Stephen Fabes who has spent the past three and a half years attempting to ride across six continents. Over that time, he has managed to cover 54,339 km (33,765 miles), passing through 42 countries along the way. During that time he has managed to check off four of the six continents – North and South America, Europe and Africa. He is now in Australia and seeking funding to help him ride across that continent, then proceed into Asia to begin heading back home to the U.K.

Stephen is seeking £3000 ($4800) to help him wrap up his cycling adventure and get him home. To that end, he has set up an Indiegogo campaign, which is just a few days into the process but is already a long way towards achieving its goal.

On his fundraising campaign page Stephen addresses the issue of having others fund his personal adventure. He gives some pretty compelling reasons why we should donate to his cause, not the least of which is some of the nice perks he is offering to those who assist. He also happens to be a medical doctor however and while he has been riding around the world he has also take time to visit medical aid stations to support those who suffer from several different tropical diseases. As he rides he has been attempting to raise awareness of the threat of these diseases in developing countries and the things we can do to overcome them.

Here ia an excellent video of Stephen’s journey thus far and what he intends to do on his final ride across Australia and Asia as he heads home.

Our other long distance cyclist is Rob Lutter, who also happens to come fro the U.K. Rob has launched a Kickstarter campaign to help fund his attempt to cycle around the world which began in London and will hopefully end there too. Rob has managed to pedal 15,000 km (9320 miles) and now finds himself stranded in Hong Kong with another 25,000 km (15,535 miles) to go before he is done. Rob has set up a Kickstarter campaign and is seeking £5750 ($9220) to help get him back to London.

Rob calls his bike expedition the Lifecycle Adventure and while is goal has been to circumnavigate the globe on his bike he is also been to use his camera to capture stunning images of the places he’s been and the people he has met along the way. So far his journey has taken him across Europe and Asia. When he leaves Hong Kong he will ride through Southeast Asia, into Indonesia, then down under to Australia before hopping across the pond to ride across the U.S. When that segment of the ride is complete, he’ll cross the Atlantic and head back to London. To get an example of Rob’s excellent photography, be sure to checkout his Kickstarter page or watch the video below.

I received requested from both of these cyclists yesterday and was amazed that there were two round-the-world riders looking for funding to continue their expeditions. I struggled for a time as to whether or not I should publish either of these fund raising campaigns as I’m not sure how I feel about either of these men asking others to help fund their adventure. On the other hand, they are offering incentives for those who help them out and their fundraising goals are rather modest compared to many others that I’ve seen. While I don’t condone the idea of getting someone else to pay for your adventure, I do feel like both of these men have proven their worth on their respective rides so far and that they are both offering solid incentives for anyone who backs them. I also appreciate that they are both upfront and forthcoming about their goals. Those qualities make it a lot easier to chip a few bucks in to help out. I’d love to hear your thoughts?