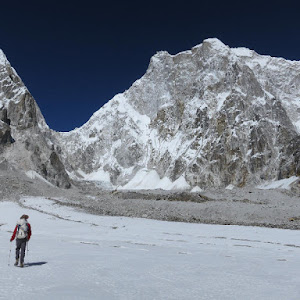 While a number of teams are in the middle of a second round of summit pushes across the Himalaya today, I wanted to share another expedition that is on going that will certainly be of interest in the days ahead.

Explorers Web is reporting that Chad Kellogg and David Gottlieb have returned to Nepal and have once again set their sites on Lunag Ri this fall. The two men were expecting to arrive in country last week and should be en route to the mountain, and while there have been no dispatches so far, I’m hoping that they’ll begin soon.

The 6895 meter (22,621 ft) Lunag Ri has the distinction of being the highest unclimbed peak in Nepal which was a huge lure for Chad and David last year. Unfortunately they never got a real opportunity to make a true summit bid as David fell ill early in the expedition and Chad was unable to complete a solo summit in very dangerous conditions. He did however make the first solo ascent of Jobo Rinjang instead.

Hopefully the team will have better luck this season and actually get the opportunity to test their skills on the slopes of Lunag Ri. You should be able to follow Chad’s dispatches by clicking here. With a little luck they should be in Base Camp soon with updates on their progress to commence shortly. If last year is any indication of what to expect, we could see a summit push sometime in early December.

Good luck to both David and Chad!