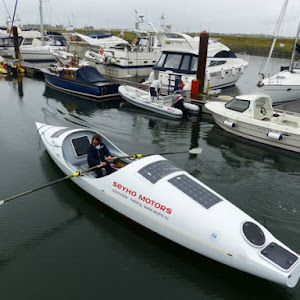 Rowing across an ocean is an incredibly challenging endeavor. After all, it requires the rower to spend hours each day working the oars, often for weeks at a time. Isolated and alone, it takes dedication and determination to make a solo journey across a body of water that at times seems endless. There is a reason that fewer people have rowed across one of the Earth’s oceans than have been in space. Quite simply, it is really tough to actually complete such a voyage.

That isn’t stopping Russian adventurer Fedor Konyukhov from trying. According to ExWeb, Konyukhov intends to make a solo row across the Pacific, non-stop from Chile to Australia. Fedor believes that it will take him roughly 200 days to complete the crossing, which will cover approximately 8000 nautical miles (14,816 km).

The Russian, who is a polar skier, mountaineer, and sailor, says he’ll set out on his Pacific crossing in December. Leaving from Valparaise, Chile, he’ll first have to navigate through islands and atolls off the coast of South America, before he makes his way out into the deep ocean. As he approaches Brisbane, Australia, he’ll encounter more islands and the massive Great Barrier Reef. In between, Fedor believes he’ll have to dodge potentially nasty storms that could potentially bring an end to his voyage at any time.

In order to successfully complete this ocean crossing in 200 days, Konyukhov will need to average 40 nautical miles (74 km) per day. That doesn’t sound like a lot, but considering the challenges he’ll face out on the water, particular as the grind of rowing begins to take its toll, covering those distance can get extremely difficult. High winds and turbulent seas will work against him, even in the spring of the Southern Hemisphere when things are better than other times of the year. Hopefully he is well prepared for those difficult conditions, as he will be hundreds of miles away from rescue should anything go wrong.

Expect to hear more in a few weeks as Fedor gets closer to his departure.