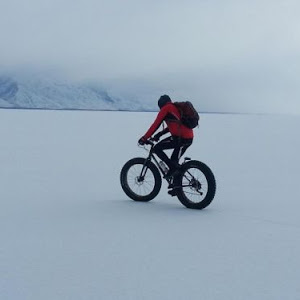 Yesterday I posted a comprehensive round-up on the status of all of the Antarctic expeditions we’ve been following closely over the past two months. Several of them had reached the South Pole this past weekend, bringing an end to their very long, very hard journeys. But there are still a few out on the ice, struggling to reach their respective finish lines. Another one of the explorers did just that yesterday, setting a new record in the process.

Mountain biker Daniel Burton completed his attempt to ride the entire distance from Hercules Inlet to the South Pole late yesterday. It has been a very difficult journey, and at times it wasn’t clear if he would make it, but Daniel persevered when times got really tough and managed to push on, even when the weather, the terrain and his own body threatened to put an end to his expedition.

Along the way, Burton received three resupplies, the last of which he burned through fairly quickly and ended up riding the final 20 miles (32 km) without food. To say that he was happy to have finally reached 90ºS would be a vast understatement. He may have completed his dream of riding to the South Pole, but this is a feat that is far from easy and will certainly be grueling for anyone else to attempt.

Congratulations to Daniel for completing the ride. Hopefully a much deserved rest is in order, preferably some place warm and tropical.

Meanwhile, Daniel isn’t the only cyclist to wrap up his expedition. Over the weekend, Juan Menendez Granados accomplished the same feat. He also limped into the Pole with barely any food left in his pack, struggling over the final couple of degrees with fatigue and lack of calories to keep him going. The difference between the accomplishment of these two men is that Juan skied some of the journey, while Daniel rode his bike the entire way. Still, Juan’s achievement should not be over looked either, and while I didn’t follow him as closely as I would have liked over the past 50 days, congratulations are in order none the less.

Finally, no Antarctic update would be complete without first checking in with the Scott Expedition. Ben and Tarka have now descended from the Beardmore Glacier and are trucking across the Ross Ice Shelf. That means the hardest, most dangerous section of the journey is now behind them and they have their sights set firmly on the finish line back at the Scott Hut along the coast. Their daily distances have increased nicely, yesterday the knocked off 23.6 miles (38 km), and while they’ve still got 395 miles (635 km) to go before they are done, there does seem to be an air of optimism and energy returning to their updates. It has been a very long and difficult journey for them, but they can see an end in sight, even if it is still a bit of ways off.

In true Antarctic fashion however, the frozen continent found another way to challenge them yesterday. While temperatures were warm by Antarctic standards, they did have to ski for 9 hours in a thick fog, which didn’t make for the most enjoyable day out. Still, progress is good and each day brings them closer to home. I’m sure they’ll take that.

Soon, the Scott Expedition will be the only team still on the ice. We’ll continue to follow them right up until the end. Hang in their guys, not much further to go!